SEOUL, Sept. 27 (Yonhap) -- Chinese Ambassador Xing Haiming has called for South Korea to join Beijing's global data security initiative seen as a move to counter a U.S. drive to discourage the use of Chinese technology on security grounds.

The two competing schemes came in the context of an increasingly acrimonious Sino-U.S. rivalry over trade, technology and security, which has posed a nettlesome foreign policy quandary to South Korea.

"Together with countries in the world, including South Korea, China would like to establish global data security, jointly shoulder the world's responsibilities for the digital era and elevate the development of digital economy to a much higher level," Xing said during the interview at the Chinese Embassy in Seoul on Tuesday. 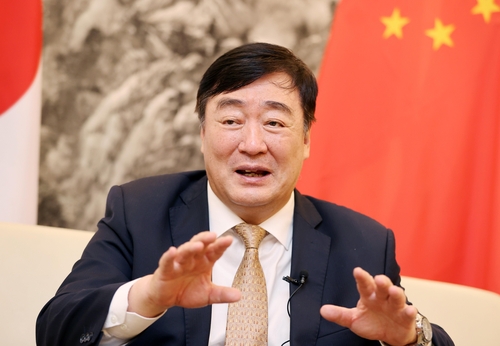 The Chinese initiative seeks to build global standards for data security, which Beijing says should be handled in a "comprehensive, objective and evidence-based" manner. The U.S. program seeks to remove what it calls "untrusted" Chinese tech firms and apps, including Huawei, from its telecommunications and other key networks.

Commenting on the U.S.' stepped-up campaign against China, Xing stressed that the "primary cause" of Sino-U.S. tensions does not rest with China.

"Imposing excessive sanctions on IT enterprises by abusing national capabilities runs afoul of market principles and international rules but also conflicts with principles of market economy and fair competition," he said.

Unabated tensions between the U.S. and China over technology, as well as their tussle over Beijing's policy on Hong Kong, the South China Sea and its western Xinjiang Uighur region, have put to test South Korea's policy aimed at deepening its security partnership with Washington and strategic ties with Beijing.

Xing said that China is "well aware" that South Korea needs to have good relations with both its security ally, Washington, and top trading partner, Beijing.

"China and South Korea are strategic cooperative partners, while South Korea and the United States are in an alliance relationship. China is well aware that both bilateral relationships are important for South Korea," Xing said.

"China sufficiently trusts and respects South Korea's external policy, which it has chosen in light of its national interests, fairness and justice ... China also would like to work together with South Korea to develop bilateral ties in a sustained, sound and stable manner," he added.

Dismissing claims that Beijing is angling for global hegemony, the ambassador stressed that his country is seeking a "win-win" relationship with Washington, though he decried the U.S. campaign against Chinese tech enterprises as "coercive and predatory."

Regarding the stalled nuclear talks between the U.S. and North Korea, Xing reiterated China's position in support of a step-by-step denuclearization approach rather than an encompassing deal aimed at addressing the nuclear issue all at once.

The deadlock in the nuclear negotiations, coupled with renewed inter-Korean tensions from the North's recent shooting and burning of a South Korean official drifting at sea has raised uncertainty for Seoul's efforts for lasting peace on the peninsula.

On the COVID-19 situation in the North, Xing said he has not heard of any official virus case from the reclusive regime, and assessed that a "very rigorous" quarantine program is under way in the North.

Asked about the timing of President Xi Jinping's possible visit to South Korea, Xing said it depends on the COVID-19 pandemic situation.

"As the Chinese ambassador posted here in South Korea, it is my foremost, biggest aspiration to take our country's supreme leader here," he said.

"The Chinese side appreciated South Korea's invitation and said that his visit will come at the earliest possible date when the coronavirus situation levels off," he added.

Talk of Xi's visit has raised hope for Beijing's wholesale lifting of unofficial restrictions on Korean entertainment and cultural products, which were triggered by the 2017 installation of a U.S. anti-missile system on South Korean soil.

Xing said there are no such restrictions -- a repeat of Beijing's argument that a decline in cultural exchanges between the two countries was attributable to public unease over the U.S. military asset deployment.