WASHINGTON, Sept. 24 (Yonhap) -- The United States will continue to engage in conversation with North Korea regardless of who wins the upcoming presidential election, a U.S. lawmaker said Thursday.

"I doubt there's any room for negotiations or conversation with the North pre-election. Would something happen post election? Perhaps," he said in a virtual seminar hosted by the Washington-based Center for Strategic and International Studies (CSIS).

Trump has held three meetings with Kim, including their first bilateral summit in Singapore in June 2018. But their talks have stalled since their second summit, in Hanoi in February 2019, ended without a deal. 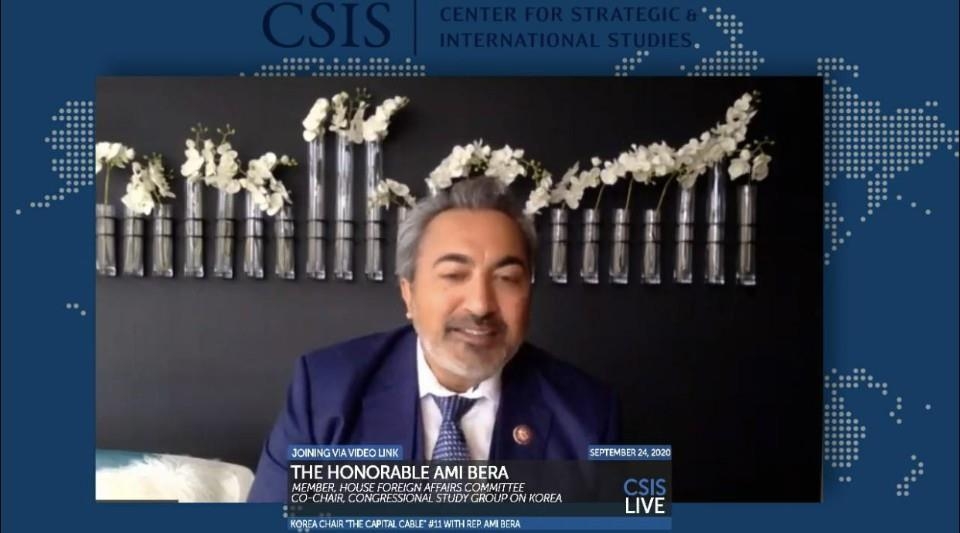 Bera said Joe Biden, former vice president and now the Democratic candidate for president, too will engage with North Korea should he emerge victorious in the Nov. 3 election.

"I can see a scenario where the vice president would engage in that, particularly because (South Korea's) Moon Jae-in administration has an interest in continuing these talks," he told the webinar, noting Biden is considered to be "much more traditional" than Trump when it comes to foreign policy.

"I think he (Biden) would engage a little bit more than President Trump has on these (foreign policy) issues," added Bera, who currently heads the House Subcommittee on Asia, the Pacific and Nonproliferation.

The lawmaker insisted a Biden administration would also work to quickly resolve a deadlock in defense cost-sharing negotiations between the U.S. and South Korea, highlighting what he called "bipartisan support" in U.S. Congress to resolve the issue.

"I think, very quickly, a Biden administration, you would resolve the burden sharing issue. And I think there's broad bipartisan support to get this resolved in Congress," he said.

Seoul and Washington have held several rounds of the cost-sharing negotiations since late last year, but continue to show a large gap.

South Korea has offered to increase its burden sharing by up to 13 percent from the US$870 million it paid under last year's agreement.

The U.S., on the other hand, is said to be asking for a 50 percent spike to $1.3 billion, while earlier reports suggested that Trump had initially demanded Seoul to shoulder $5 billion a year while threatening to pull at least part of U.S. troops stationed in South Korea.

The Democratic lawmaker insisted a Biden administration would not talk about pulling out troops.

"I don't think a Biden administration would talk about reducing forces, not at this particular time, when there are real tensions in the region," said Bera.

Should Trump get reelected, he too would "try to restart talks" with South Korea on defense cost-sharing, he noted.

With regard to the ongoing U.S. initiative to build a NATO-like collective security structure in the Indo-Pacific region, the U.S. lawmaker agreed on the need for such a multilateral alliance, but said it must not lead to a confrontation with China, especially for countries in the region.

"It's not the United States or China. The countries in the region will have to co-exist with both global powers," he said.

The Trump administration has said membership in the envisioned multilateral alliance, currently known as the Quad with the membership of four countries -- Australia, India, Japan and the U.S. -- would not mean taking sides with the U.S. over China.

Still, Washington has made it clear that countering what it calls "aggressions from the Chinese communist party in all domains" would be one of its objectives.

"We're always going to compete with China but let's do so under the rule of law," said Bera. "So I think you can create those alliances in the region, then hopefully nudge China in a better direction." 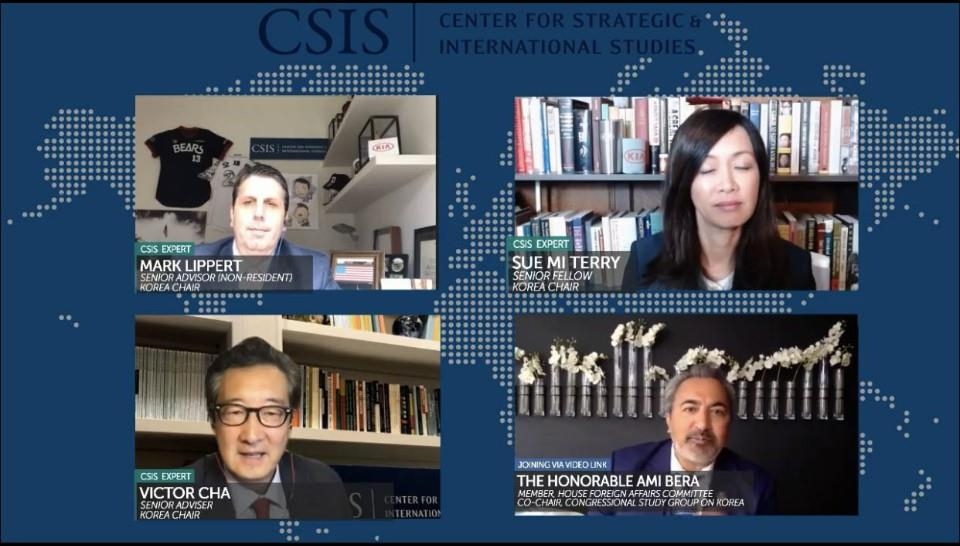 Meanwhile, experts at Thursday's webinar expressed concerns over the recent killing of a South Korean government official by North Korea, noting the incident may undermine South Korea's recent push for reconciliation with the communist state and its efforts to denuclearize the Korean Peninsula.

"(It is) very, very inconvenient, I would say, for the Moon government, given that President Moon had just given this big speech at the UN General Assembly where he talked about inter-Korean reconciliation and a peace initiative as sort of the door opener to making progress on denuclearization," said Victor Cha, a Korea expert at CSIS and former director for Asian affairs at the U.S. National Security Council.

On Tuesday, the South Korean president called for international support for declaring an end to the 1950-53 Korean War, which ended only with an armistice treaty, technically leaving the divided Koreas at war.

"They are trying to make something happen with North Korea. Not getting anywhere," she added.