SEOUL, Sept. 25 (Yonhap) -- A U.S. reconnaissance aircraft flew over the Yellow Sea earlier this week around the time when North Korea brutally killed a South Korean official drifting near the western sea border.

On Tuesday, North Korea shot the fisheries official who was adrift in its waters and incinerated his body, according to the South Korean military. He went missing the previous day while on duty near the Yellow Sea border island of Yeonpyeong.

According to Aircraft Spots on Tuesday, an RC-135S Cobra Ball aircraft "conducted a mission over the Yellow Sea on a miscoded Mode-S code 75C75C." The aviation tracker did not elaborate on the exact time of its flight, but the operation appears to have taken place during the day.

The aircraft showed quite a complicated, unusual flight route over the area.

Seoul's defense ministry said it learned of the incident by analyzing intelligence from various sources, and a military official said it worked closely with the U.S. side regarding the matter. North Korea remains mum on the case.

The U.S. has often sent the plane, along with other types of spy aircraft, over the Korean Peninsula on an apparent mission to monitor North Korea.

According to No callsign, another aviation tracker, two RC-12X Guardrails, C-146A Wolfhound and EP-3E surveillance planes were spotted flying over the peninsula Friday.

South Korea's defense ministry also said it has tightened the military's readiness posture as of Thursday to step up monitoring of the North's military activities, particularly near the tense sea border. 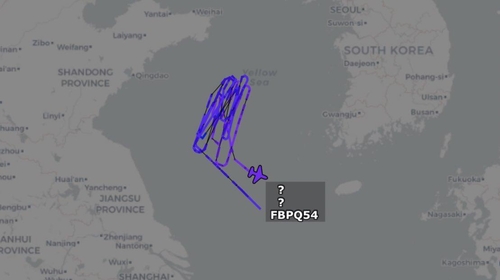