SEOUL, Sept. 25 (Yonhap) -- Foreign Minister Kang Kyung-wha said Friday that efforts to engage with North Korea toward denuclearization and peace must continue despite the North's brutal killing of a South Korean official.

The remark came as public outrage has been mounting following revelations that the North shot and killed the fisheries official drifting in waters near the western maritime border and burned his body earlier this week.

The killing has exacerbated the already frosty inter-Korean relations and dealt a blow to President Moon Jae-in's push for engagement with Pyongyang, including his call for a declaration of a formal end to the Korean War in a U.N. General Assembly speech earlier this week.

"Engaging with North Korea, a very closed and insular country, is very difficult and frustrating ... It takes a lot of patience and undermines our readiness and goodwill, but I think in the end we need to stay the course of peaceful engagement," Kang said in a virtual seminar hosted by the U.S.-based Asia Society, a nonprofit foundation, on the occasion of the 75th U.N. General Assembly.

She was asked by the moderator if Seoul's efforts for peace have retrogressed due to the killing.

Seoul has strongly condemned the killing as an inhumane and unpardonable act and demanded Pyongyang apologize and punish those responsible.

In Friday's session, Kang said Seoul remains committed to advancing the peace process based on the support of the international community and firm alliance with the United States.

"We are about consolidating peace and, if possible, co-prosperity with North Korea ... with the abiding support of the international community and based on the solid combined defense posture of the ROK-U.S. alliance," she said, referring to her country by its official name, the Republic of Korea. 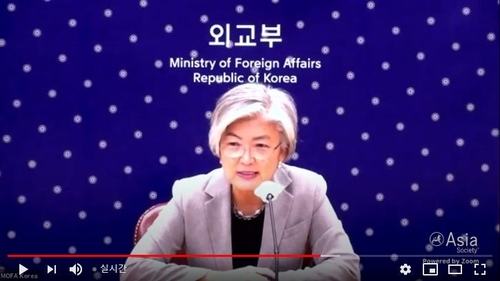