"In cooperation with opposition parties, (the DP) will pass a parliamentary resolution denouncing North Korea at a plenary session so that we can inform the world of the National Assembly's firm and stern stance and resolution against the brutality by the North," DP floor leader Rep. Kim Tae-nyeon said in a meeting of the top party council.

"The uncivilized and savage brutality by North Korea cannot be tolerated under any circumstance," Kim noted.

South Korea's defense ministry said a 47-year-old South Korean fisheries official was shot to death and his body was set on fire by the North Korean military on the northern side of the western inter-Korean maritime border Tuesday.

The late official was drifting at sea after disappearing from a South Korean inspection boat a day earlier.

The ruling party plans to get the National Assembly to call a plenary session Monday to officially pass the envisioned resolution if the main opposition party approves, the officials said. 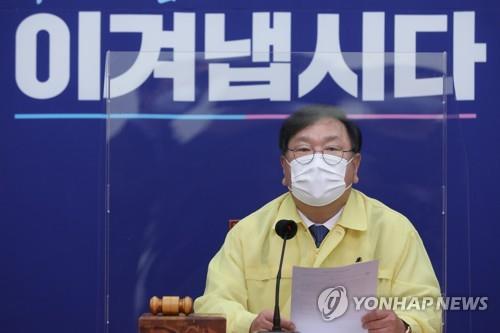