SEOUL, Sept. 25 (Yonhap) -- South Korea's state intelligence agency doesn't see North Korean leader Kim Jong-un as having been involved in the killing of a South Korean citizen by the country's military, according to sources affiliated with a parliamentary intelligence committee.

"After watching the North (normally) receiving written messages from our side through the Military Armistice Commission of the United Nations Command, (I) have determined that (the killing) may have not been reported up to Chairman Kim but was commanded by officials including local military commanders," Park said.

He also said the country's special intelligence that has been gathered does not show any signs of Kim's involvement in the case.

The intelligence chief said South Korea will seek the North's cooperation in searching the body of the late South Korean civil servant as well as in looking into the cause of the incident.

On Thursday, the defense ministry said the 47-year-old civil servant, who worked for the oceans ministry, was shot to death by the North Korean military on Tuesday after drifting near the northern side of the western inter-Korean maritime border. His body was set on fire on the ocean the same day, the ministry said. 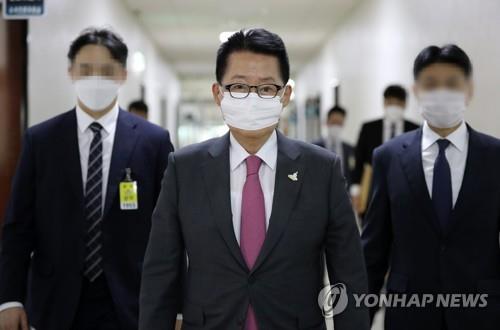