SEOUL, Sept. 26 (Yonhap) -- Unionized workers at Hyundai Motor Co. voted to accept a wage freeze for the first time in 11 years as the nation's largest carmaker struggles to cope with the impact of the coronavirus pandemic, the company said Saturday.

In a vote held Friday, 53 percent of 44,460 workers who cast a ballot approved this year's wage agreement between the labor union and management, the company said in a text message.

Hyundai Motor and its union reached a wage deal without a strike for the second consecutive year. They will sign the wage deal Monday, the company said in a statement.

The 49,598-member union accepted the company's proposal that included a freeze on basic pay, a one-off bonus amounting to 150 percent of monthly salary, 1.2 million won (US$1,029) in special COVID-19 allowance, 10 company shares and 200,000 won in gift certificates.

It is the third time the company and the union agreed on a wage freeze, after the 1998 Asian foreign exchange crisis and the 2009 global financial crisis. 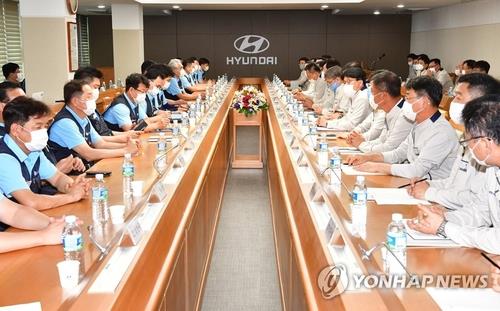