INCHEON, South Korea, Sept. 27 (Yonhap) -- South Korea's Coast Guard and Navy continued their search Sunday for the body and belongings of a fisheries official shot to death by the North Korean military at sea last week despite Pyongyang's warnings against "intrusion" into its waters.

The authorities mobilized 39 vessels, including 16 naval ships, and six aircraft for their operations in the front-line areas near the Northern Limit Line (NLL), a de facto inter-Korean sea border, where the 47-year-old official went missing Monday.

The South claims the North shot the official to death and set his body on fire Tuesday, whereas the North argues its military shot at the "illegal intruder" but burned a "floating material" rather than his body. 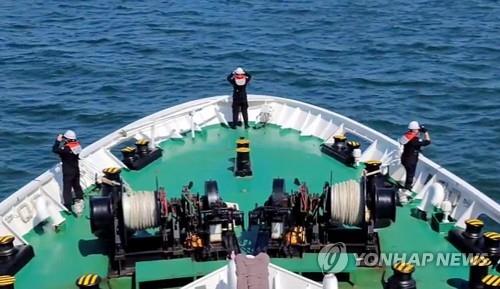 "We can never overlook any intrusion into our territorial waters and we seriously warn the south side against it," the North's official Korean Central News Agency said in a report

"We urge the south side to immediately halt the intrusion across the military demarcation line in the west sea that may lead to escalation of tensions," it added.

The North has long disputed the NLL, arguing the boundary was unilaterally set by the then commander of the U.S.-led U.N. Command after the 1950-53 Korean War. It argues the boundary should be redrawn farther south.

A South Korean Coast Guard official stressed that the search operations have been taking place strictly in waters south of the NLL.

"We are also carrying out activities to monitor dozens of Chinese fishing vessels as they are operating near the NLL," the official said.

Meanwhile, the authorities are not ruling out the possibility that the ill-fated official drifted into the North Korean waters with an intention to defect to the North, though the bereaved family denies that possibility.

They are currently carrying out a digital forensic probe on a computer on the fishery patrol ship, which the official had boarded, to find out if there are any search records related to North Korea.

The investigators have also restored two surveillance cameras, which had been out of order since Sept. 18, to check if anybody broke them on purpose.