Lee also said upon arriving in Washington that his talks with his U.S. counterpart, Deputy Secretary of State Stephen Biegun, will also include President Moon Jae-in's recent call for efforts to declare a formal end to the 1950-53 Korean War.

"The reason I came this time is to discuss all related current issues and therefore I certainly plan to discuss the possibility of declaring an end to the war," he said while speaking to reporters after arriving at Washington's Dulles International Airport.

His trip came just days after North Korea shot and killed a South Korean fisheries official who drifted into North Korean waters. North Korean leader Kim Jong-un has since apologized for the killing, and South Korea is demanding a joint investigation.

The U.S. has expressed support for both Seoul's condemnation and demand for a detailed explanation.

"We will talk about how to cooperate with the U.S. on this," Lee said. 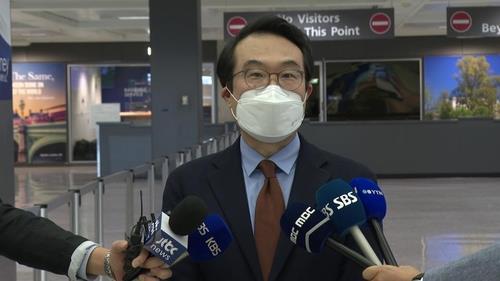 Lee added their discussions will also include the possibility of resuming humanitarian assistance for the impoverished North, noting U.S. Secretary of State Mike Pompeo has already expressed a U.S. willingness to do so.

"I believe discussions on the issue are surely possible," he told reporters.

When asked if South Korea was seeking to push for an end-of-war declaration before the Nov. 3 U.S. presidential election, Lee said he hopes to first find out what the U.S. had in mind.

Lee and Biegun are also expected to discuss ways to bring North Korea back to the dialogue table over its denuclearization process.

Pyongyang has stayed away from denuclearization talks since the second U.S.-North Korea summit held in February 2019 ended without a deal.