(ATTN: UPDATES with more details in paras 6-9)
By Nam Kwang-sik

KDB plans to finalize the preliminary bidding by Oct. 26 to sell all or part of the 83.45 percent stake in Hanjin Heavy Industries, the shipbuilder said in a regulatory filing.

KDB said it plans to sell at least a 63.44 percent stake in Hanjin Heavy Industries and decide on whether it sell the whole stake owned by the financial institutions before the end of the final bidding. 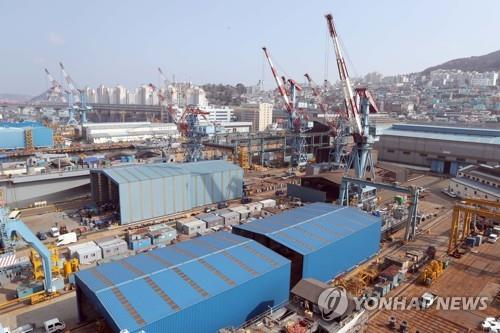 Hanjin Heavy's subsidiary HHIC-Phil Inc. in the Subic Bay Freeport Zone on the west coast of the island of Luzon in the Philippines has been suffering massive losses since 2016 due to a drop in new orders amid the protracted slump in the global shipbuilding industry.

In Feb. 2019, Hanjin Heavy had its capital impaired due to its Philippine subsidiary's poor performance.

Three months later, the midsized shipbuilder broke away from its capital erosion through a debt-to-equity swap worth 687.4 billion won (US$586 million) and capital reduction, which made KDB the biggest shareholder of Hanjin Heavy with a 16.14 percent stake.

Hanjin Heavy posted 64.3 billion in net profit in the January-June period of the year, down 70 percent from a year ago due to faltering results in its shipbuilding and construction sectors.