SEOUL, Sept. 28 (Yonhap) -- The main opposition party ratcheted up criticism on the Moon Jae-in government Monday over the recent shooting death of a South Korean fisheries official by the North Korean military.

The main opposition People Power Party (PPP) has been taking aim at what it brands as the government's failure to prevent the death of the 47-year-old civil servant last Tuesday.

After disappearing last Monday from an inspection boat in waters near the western sea border with North Korea, he was shot dead by North Korean soldiers on the sea the next day after drifting across to the northern side of the sea border.

His body was set on fire on the sea the same day, according to the defense ministry here.

Renewing its criticism, leaders of the PPP swiped at Moon and his administration during the party's top council meeting.

"President Moon has himself said several times that the responsibility of safeguarding the lives of the people lies with the president. But concerning the latest incident, he has stayed mum," interim PPP leader Kim Chong-in said.

The leader argued that the government seems to have not taken any action to save the official even though it was aware of the situation in the initial phase of the case.

Kim also pressed Moon to "come forward to the press and clarify his stance."

Speaking at the same meeting, PPP floor leader Rep. Joo Ho-young also pledged efforts to get to the bottom of the "riddle-laden" death.

"I will go all the way to interrogate (those responsible) by (launching) a parliamentary probe or through the regular parliamentary inspection (of the administration)," Joo noted.

The floor leader also called for an official parliamentary probe into the case whose cause and proceedings, he said, are "laden with riddles."

Joo played down the apology North Korea offered to the South over the shooting case last week, claiming that many people around the president are falsely representing the apology as a good chance in the inter-Korean relationship.

He also accused the ruling Democratic Party of refusing to pass a parliamentary resolution condemning the shooting death by the North and hold an emergency parliamentary interpellation session on the case. 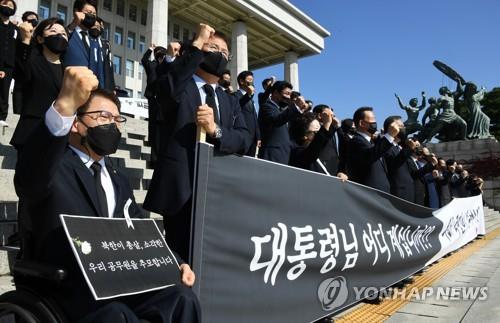 Wearing black face masks and black suits symbolizing mourning for death, PPP lawmakers staged a rally in front of the main assembly building in protest of the shooting death.

The opposition lawmakers blamed Moon for the death, carrying a placard that says, "Where are you, President? One of our nationals has died." 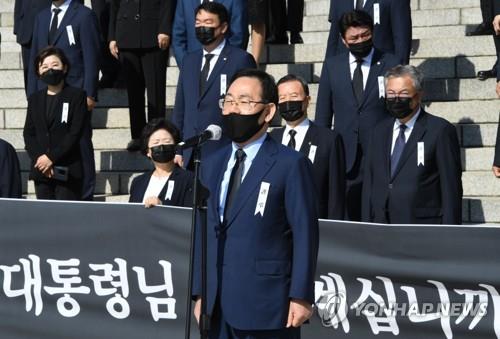 At the initiative of the ruling Democratic Party, the rival parties had sought to pass a resolution denouncing the North's recent shooting through the National Assembly's plenary session Monday.

But the plan fell through as the parties failed to narrow their differences on the terms of the resolution, party officials said.