SEOUL, Sept. 28 (Yonhap) -- Prosecutors on Monday dropped charges against Justice Minister Choo Mi-ae and her son, who have been suspected of gaining special favors during the latter's military service in 2017.

The Seoul Eastern District Prosecutors Office said it withdrew the charges against Choo, her 27-year-old son surnamed Seo, a former aide to Choo and a former military officer assigned to Seo's base at the time.

Choo has come under fire over allegations that she used her influence as the then chairwoman of the ruling Democratic Party to extend her son's medical leave after he underwent knee surgery in June 2017.

"It is difficult to conclude based on our investigation that a deceptive scheme or external pressure was used to request and take leave," the prosecution said in a statement. 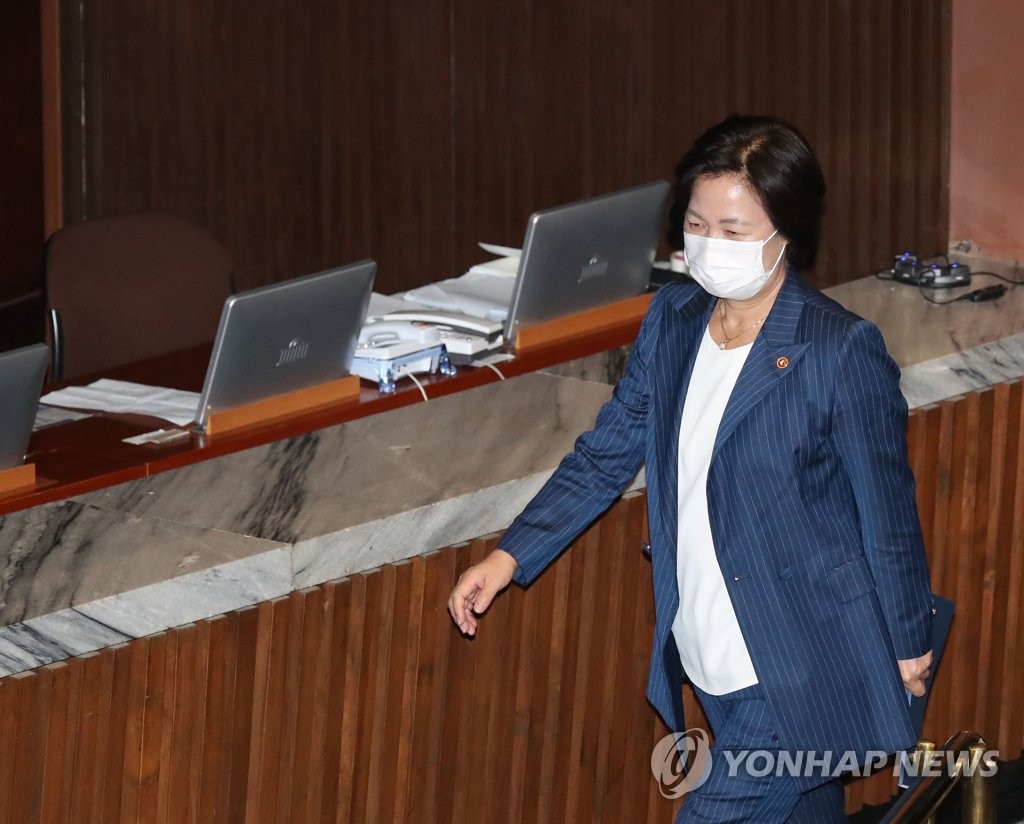 Seo did his mandatory military service in the Korean Augmentation to the United States Army (KATUSA) for the 2nd Infantry Division of the U.S. Eighth Army.

He took medical leave from June 5-14, extended it once through June 23, and then used four personal vacation days.

Whistleblowers have alleged that Seo did not return to his unit at the end of his second medical leave, even though his personal vacation had yet to be approved.

Defense ministry documents have also appeared to indicate that Choo or her husband made a phone call to the ministry to inquire about getting the first medical leave extended.

"(Seo) did not return to his base because his vacation had been approved, and therefore it does not qualify as desertion," the prosecution said.

Choo's then-aide did contact a military officer at Seo's request to find out about extending medical leave, but only to learn the procedural steps, according to the prosecution.

"It is difficult to view that as illicit solicitation," it said.

The prosecution also noted no clear evidence of Choo's personal involvement, including any request by her or her husband to the defense ministry. It said it retrieved text messages exchanged between Choo and her then-aide.

On June 14, the aide told Choo that Seo's vacation had been taken care of and that it was agreed that a doctor's note would be sent at a later date, as soon as it became available.

A week later, Choo asked in a message that the aide get in touch with her son. The message included the phone number of a military officer.

In response, the aide wrote that he had spoken to the officer and asked for another extension, and would hear back following an internal review.

The prosecution said that Choo wrote in response to its queries on Saturday that she had asked her aide to find out about her son's situation but never ordered an extension of leave.