SEOUL, Oct. 3 (Yonhap) -- Airline traffic in South Korea and other countries in the Asia-Pacific region will remain well below 2019 levels next year due to the coronavirus's impact on the airline industry, according to a global ratings agency Saturday.

The pace of the recovery will depend on each market's relative success in bringing the COVID-19 pandemic under control to help improve passenger confidence and reduce the risk of further travel restrictions, Fitch Ratings said.

"Airline passenger volume could improve faster than we forecast if an effective vaccine is distributed sooner than we believe or if there is more success in containing the pandemic. However, we foresee flat demand in 2021 that is well below the 2019 base should there be limited progress on this measure," it said. 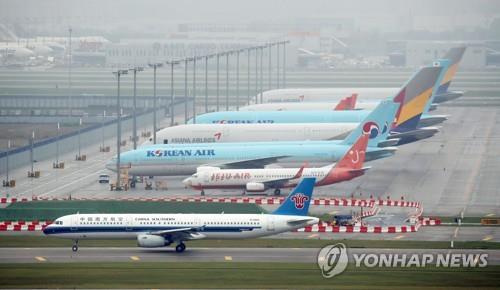 The ratings firm picked China as the country whose air passenger traffic shows a rapid recovery thanks to its success in containing the pandemic.

Korean airlines have suspended most of their flights on international routes since March as more than 180 countries and territories strengthened entry restrictions amid virus fears.

Air traffic to stay below pre-pandemic levels next year

Air traffic to stay below pre-pandemic levels next year