Lee Jong-myeong, a former third deputy director at the National Intelligence Service (NIS), was sentenced to eight months in jail for inflicting losses to state coffers and embezzling while on duty. 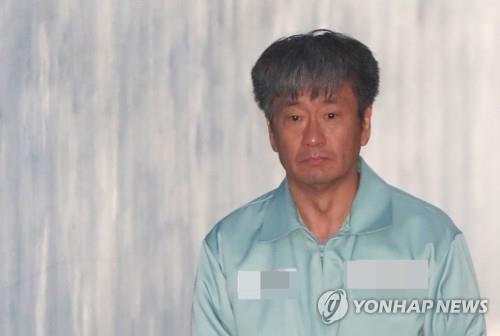 The Seoul Central District Court found him guilty of squandering some 570 million won (US$485,436) in budget to pursue two prohibited political campaigns from 2011 to 2012 under the Lee administration.

The projects sought to track down Kim's rumored slush fund and bring home from abroad a suspected financial donor to Roh's close aide, respectively, according to court records.

"He committed crimes to protect the administration, not the country, ill-using the fact that (the budget spending of) the spy agency is rarely put under internal inspection," the court said, delivering the prison sentence.

Those projects could not be justified as being within the scope of intelligence service as the act of following a former president's secret fund constitutes meddling in domestic politics, which is categorically prohibited by the NIS, the court also said.

The court ruling, however, cleared Lee of other charges, including a violation of the National Intelligence Service Act for putting tails on other liberal figures, including late Seoul Mayor Park Won-soon and the wife of Roh.

The court also recognized Lee's decades of service at the military before joining the NIS and track record of no prior crimes in handing out the 8-month sentence, it said.

Having been indicted on the same charges in 2017, Won was recently sentenced to a seven-year prison term at an appellate court. The prosecution handling the case has appealed the sentence to the Supreme Court.