The business sentiment index (BSI) for local manufacturers came to 68 for next month, unchanged from the previous month, according to the data from the Bank of Korea (BOK).

The outlook index improved for the third straight month in September after it dipped to the lowest level in over 12 years for June amid the new coronavirus outbreak.

The October data still marked the highest level since 69 registered for March. 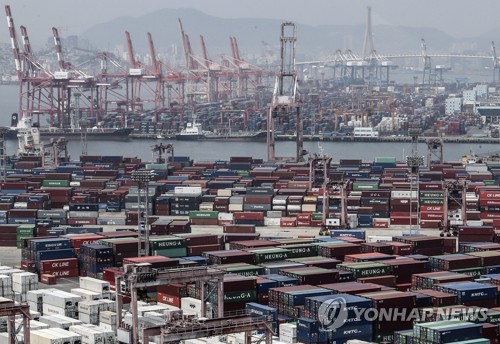 The country's daily virus cases had been in the triple digits for more than a month since Aug. 14, due mainly to cases tied to a church in northern Seoul and an anti-government rally in mid-August.

The resurgence in virus cases and stricter virus curbs are presumed to have dealt a heavy blow to small businesses, in particular, the service sector.

The index gauging manufacturers' assessment of current business conditions came in at 68 in September, up from 66 in the previous month and the highest since January.

The BSI for conglomerates came to 74 for October, up from 73 for September, while that of smaller companies reached 61, down from 63 for this month as they felt more pinch amid the virus fallout.

The business sentiment index among exporters for the next month came to 75, up from 74 for the current month, with that of domestically focused firms staying flat at 64.

Meanwhile, the BSI of non-manufacturing businesses came to 62 for October, down from 69 for this month as the COVID-19 pandemic more dented face-to-face services, the BOK said.

The October data marked the sharpest on-month fall since April when the corresponding figure declined by 16 points.