SEOUL, Sept. 28 (Yonhap) -- The main creditor of Asiana Airlines Inc. and SsangYong Motor Co. said Monday it will consider selling the carrier at the right time and closely monitor the carmaker's business sustainability for a possible cash injection.

Lee Dong-gull, chairman of the state-run Korea Development Bank (KDB), made the remarks in the first media briefing held after he was appointed to his second three-year term early this month.

"It's a demanding job to sell Asiana together with its affiliates in a package deal or to sell it separately from the affiliates. We will consider selling Asiana either way at the right time," Lee said. 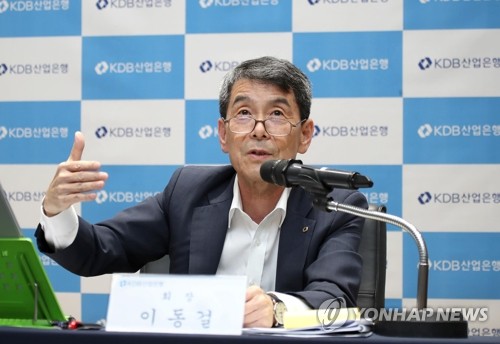 This photo taken on Sept. 28, 2020, shows KDB Chairman Lee Dong-gull delivering a briefing on the state bank's business strategies in an online press conference held at the KDB headquarters building in Yeouido, Seoul. (PHOTO NOT FOR SALE) (Yonhap)

On Sept. 11, Asiana's creditors -- the KDB and the Export-Import Bank of Korea -- decided to end a drawn-out deal to sell the debt-ridden carrier as they failed to iron out differences over acquisition terms with HDC Hyundai Development Co. amid the coronavirus outbreak.

The HDC-led consortium signed the deal to acquire Asiana from Kumho Industrial Co. as well as new Asiana shares to be issued and the carrier's six affiliates for 2.5 trillion won (US$2.1 billion).

But HDC demanded renegotiations with Kumho and the creditors over the terms and another round of due diligence on the country's second-biggest airline to reflect the COVID-19 pandemic's impact on the airline industry, which was rejected by the creditors.

HDC is widely expected to file a suit against Kumho Industrial to retrieve some of the advance payment as its consortium paid 250 billion won, or 10 percent of the acquisition price, to Kumho Industrial.

As for possible financial support to SsangYong Motor, the chairman said it depends on the company's ability to continue as a going concern.

"I've heard HAAH Automotive Holdings, Inc. expressed its intention to acquire (SsangYong Motor), but it's not a matter over which creditors have a say. I was notified that the two sides are in close consultations," he said.

HAAH Automotive Holdings is a California company that imports vehicles for the U.S. market.

When contacted by Yonhap News Agency several times, the U.S. company stated, "HAAH Automotive Holdings does not comment on rumor and speculation."

The U.S. company reportedly suggested it will make an investment worth 300 billion won for the control of SsangYong Motor and is in talks with the carmaker's Indian parent Mahindra & Mahindra Ltd.

Mahindra, which owns a 74.65 percent stake in SsangYong Motor, said in August it will give up its status as the biggest shareholder of SsangYong if it finds a new investor.

Mahindra has said it does not have a plan to inject fresh capital into SsangYong.