The move came after Lee Dong-gull, chairman of the state-run Korea Development Bank (KDB), said Monday the bank will consider whether to provide financial support to Jeju Air if requested by the carrier. 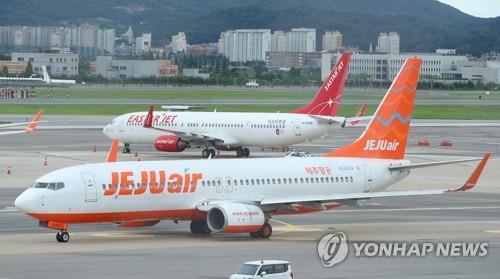 In May, South Korea launched a fund worth 40 trillion won (US$34.1 billion) to provide financial assistance to the country's backbone industries, including the airline service sector, amid the economic fallout of the new coronavirus.

The government has said airlines, shippers and others hit hard by the COVID-19 pandemic are eligible for the Key Industry Stabilization Fund's financial support if they have more than 500 billion won in debt and more than 300 employees each.

Local airlines have suspended most of their flights on international routes since March, as an increasing number of countries have strengthened entry restrictions amid virus fears.

But Lee ruled out the fund's financial support to Eastar Jet Co., saying the budget carrier has seen its capital eroded before the coronavirus pandemic hit South Korea earlier this year. 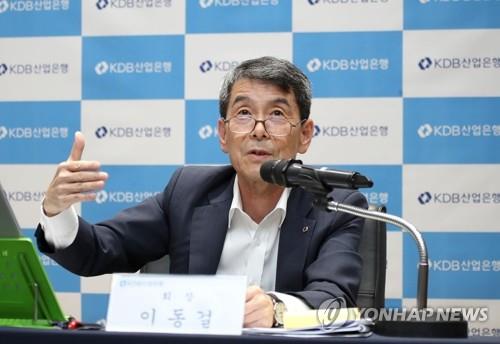 Embattled Eastar Jet has said it plans to lay off 605 of its 1,216 employees on Oct. 14 as part of efforts to find a new investor.

Eastar, which has suspended all flights since March, faces bankruptcy after Jeju Air scrapped its plan in late July to take over Eastar due to rising COVID-19 pandemic-related uncertainties.

In early September, the Key Industry Stabilization Fund approved a capital injection of 2.4 trillion won into Asiana Airlines to help the carrier stay afloat, according to the KDB.

The KDB and the Export-Import Bank of Korea already injected a combined 3.3 trillion won, including 1.7 trillion won this year, into Asiana in the past two years.

On Monday, Lee said the KDB will consider selling Asiana at the right time.

In early September, Asiana's creditors -- the KDB and the Eximbank -- ended a drawn-out deal to sell the debt-ridden carrier, as they failed to iron out differences over acquisition terms with HDC Hyundai Development Co. amid the coronavirus outbreak.

Jeju Air says no decision yet on seeking state support

Jeju Air says no decision yet on seeking state support