SEOUL, Oct. 3 (Yonhap) -- The number of hacking attempts on South Korea's defense information system has risen rapidly over the past five years, prompting the defense ministry to beef up efforts to fend off cyberattacks, officials said Saturday.

The defense information system refers to a set of equipment and software that deal with national security-related information, and the system is connected to both the military intranet and internet networks.

A total of 8,700 hacking attempts on the system were detected as of end-August this year, with the figure for all of 2019 coming to 9,121, according to the data compiled by the defense ministry.

A majority of the IP addresses used for the recent attacks were traced to China and the United States, but it is hard to detect where those attacks actually originated from as hackers often use proxy addresses, according to defense ministry officials.

In 2016, classified military documents were leaked, as the military's intranet was hacked, for which North Korea was believed to be responsible.

"No sensitive military information has since been compromised. We've been working on the establishment of a multilayered protection system," a ministry official said.

With a goal to better cope with growing cybersecurity threats, the defense ministry earmarked around 250 billion won (US$213.6 million) in 2018 for a five-year comprehensive plan to develop technology and train manpower for cyberwarfare.

The ministry also plans to commission a research project on ways to better ensure the security and stability of the national defense information system, according to the official. 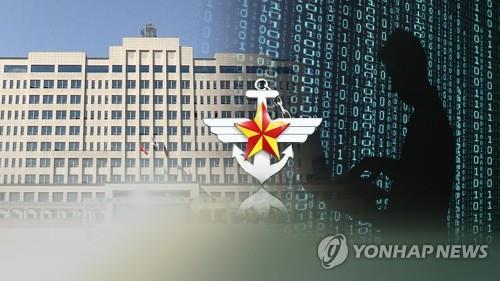