SEOUL, Sept. 29 (Yonhap) -- The top diplomats of South Korea and Britain held talks in Seoul on Tuesday about ways to enhance bilateral relations after Britain's withdrawal from the European Union (EU) and other issues.

Foreign Minister Kang Kyung-wha and her British counterpart, Dominic Raab, held the fifth South Korea-Britain Strategic Dialogue, during which they discussed efforts to further develop friendly cooperative relations between the two countries "as important partners that share universal values," the foreign ministry said in a release.

Raab arrived in Seoul for a single-day trip that included a visit in the morning to the Demilitarized Zone (DMZ) separating the two Koreas.

During the talks, Kang held out hope that Seoul and London will continue to strengthen cooperation even after Britain's complete withdrawal from the EU through high-level economic talks in the future.

Raab agreed with Kang and hoped the two countries will further deepen ties in such fields as public health, science and fifth-generation technology (5G). 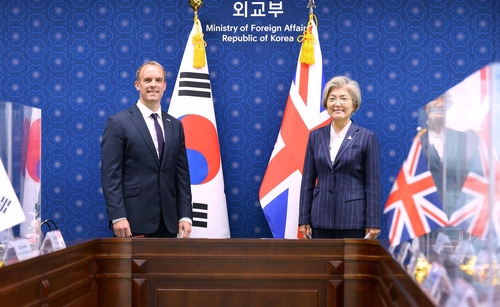 Britain is undergoing a transition period after its parliament ratified the agreement to leave what is now the 27-member regional bloc in late January. It has until Dec. 31 to negotiate with the EU the terms for their future relationship.

Seoul and London have been striving to maintain the existing bilateral frameworks and further promote their close partnership in the post-Brexit era. They have signed the bilateral "continuity" free trade agreement (FTA) to allow businesses to keep trading freely after Brexit.

On climate change, the ministers noted that Seoul and London are both slated to host two key events next year -- Partnering for Green Growth and Global Goals 2030 (P4G) and the United Nations Climate Change Conference (COP26), respectively -- and called for support and attention for each other so as to advance international efforts toward tackling the global challenge.

In Tuesday's talks, the two sides also discussed joint efforts for the development and distribution of COVID-19 vaccines and medicine through multilateral platforms, according to the foreign ministry.

They last held their strategic dialogue in London in 2018.