WASHINGTON, Sept. 29 (Yonhap) -- North Korea will not sell off its dignity for its economic development while it will also safeguard its own security with "absolute strength" it has built, the head of the North's diplomatic mission to the United Nations said Tuesday.

"It is a matter of fact that we badly need an external environment favorable for economic construction. But we cannot sell off our dignity, just in the hope of a brilliant transformation -- the dignity which we have a defended as valuable as our own life. This is our steadfast position," Kim Song said in a speech at the U.N. General Debate.

The North Korean diplomat noted his country's leader, Kim Jong-un, has already ordered his country to break through the difficulties by "confronting them head-on by dint of self-reliance."

"The maneuvers of hostile forces to stifle the DPRK and other numerous difficulties will continue impeding our advance. However, the struggle of the people to overcome them and open up a road to prosperity by its own efforts will also be further intensified," the North Korean ambassador told the world body in New York. 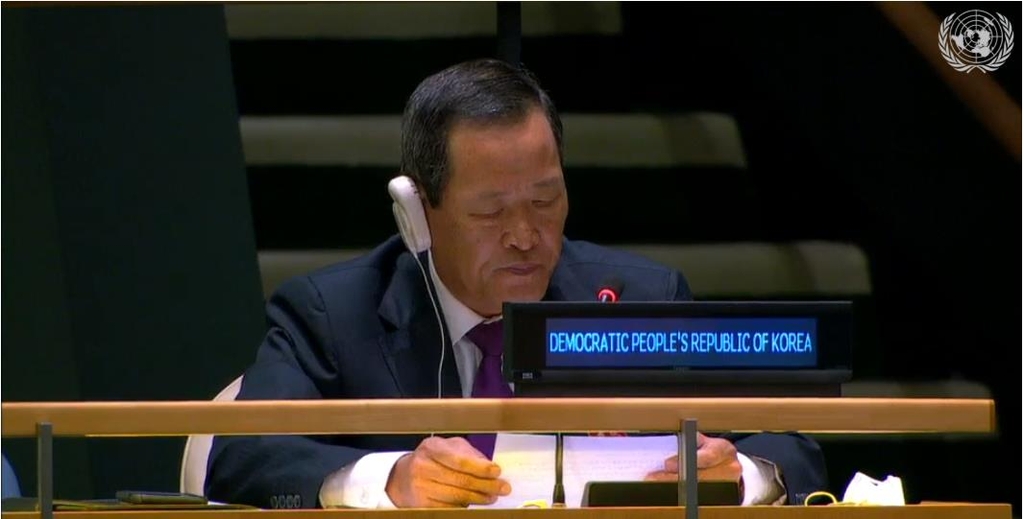 Kim said his country was now directing all its efforts to economic development, claiming it has already secured a "reliable guarantee" for its own security.

"Based on its reliable guarantee for safeguarding the security of the state and people, the DPRK is now directing all its efforts to economic construction," he told the U.N. meeting.

North Korea declared having perfected its nuclear and long-range missile capabilities after staging its sixth and last nuclear test in September 2017, which was followed by a series of intercontinental ballistic missile launches.

Kim reaffirmed his country's resolve to maintain its military capabilities, insisting its security guarantee came from its "absolute strength" to prevent war.

"It is an undeniable reality of today that cutting edge military hardware, including stealth fighters, continue to be introduced into the Korean Peninsula and nuclear strike means of all kinds of directly aimed at the DPRK," he said.

"The conclusion we have drawn is that peace never comes off itself, by a mere wish of one side and it is not granted by someone else, either. In the present world where high handedness based on strength is rampant, genuine peace can only be safeguarded when one possesses absolute strength to prevent war itself," he added.

The North Korean diplomat offered condolences to the bereaved families of those lost to the new coronavirus, and said the situation in his country "is now under safe and stable control" thanks to what he called "far-sighted leadership" of its leaders.

North Korea closed its borders shortly after neighboring China and South Korea reported outbreaks of the novel coronavirus at the beginning of this year.

The impoverished North has yet to officially report an outbreak, while access to information regarding conditions in the North remains extremely limited.

Kim noted his country suffered considerable losses due to a series of typhoons but is overcoming such damage on its own.

(LEAD) N. Korea will not sell off 'dignity' for development, security: UN ambassador

(LEAD) N. Korea will not sell off 'dignity' for development, security: UN ambassador