WASHINGTON, Sept. 30 (Yonhap) -- South Korea and the United States have formed a "better foundation" for the declaration of an official end to the Korean War, South Korea's top nuclear envoy said Wednesday.

"Since we had very broad and meaningful discussions, I believe a better foundation that will continue to serve us better in the future has been created," Lee Do-hoon told reporters when asked whether the countries were able to reach a mutual understanding on the need to declare a formal end to the Korean War.

Lee's trip to the U.S. came shortly after South Korean President Moon Jae-in urged international efforts to declare an official end to the 1950-53 Korean War, which he said would provide a security guarantee the North has long sought, and thus prompting the communist state to give up its nuclear ambitions. 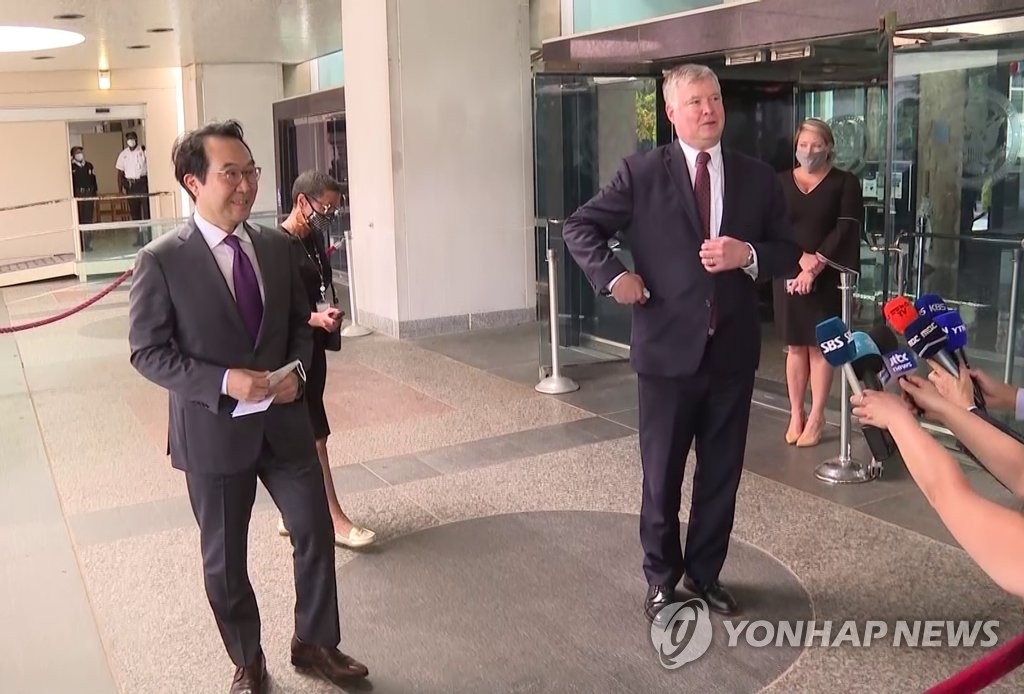 The South Korean envoy earlier expressed hope to win Washington's support for the peace initiative. South and North Korea technically remain at war as the Korean War ended only with an armistice and not a peace treaty.

Lee confirmed declaring the war's end will be part of the denuclearization process he and his U.S. counterparts discussed this week when asked, but noted it will only be a portion of the whole process to denuclearize the peninsula and establish lasting peace there.

"Declaring an end of the war is an important issue, but it can be understood as part of the entire process to draw a big picture," said Lee.

"We had deep and broad discussions on very important issues such as those related to the current situation, how we can resume talks (with North Korea) and how we can advance the denuclearization process of the Korean Peninsula and establish a peace regime when the talks are resumed," he added.

North Korea has stayed away from the denuclearization talks since leader Kim Jong-un's second summit with U.S. President Donald Trump in February 2019 ended without a deal.

Biegun earlier said the two sides had "excellent" discussions on what he called "constructive ways" and "creative ideas" to advance diplomacy on the Korean Peninsula.

"Personally, I believe I was able to hold very meaningful and practical discussions," Lee said Wednesday.