SEOUL, Oct. 1 (Yonhap) -- What has largely been a successful season as a new ace for the Toronto Blue Jays has ended on a bitter note for Ryu Hyun-jin.

Ryu was torched for seven runs on eight hits in his season-low 1 2/3 innings against the Tampa Bay Rays in Game 2 of the American League (AL) wild-card series at Tropicana Field in St. Petersburg, Florida, on Wednesday (local time). The Blue Jays lost 8-2 and were eliminated from the best-of-three series 2-0. They lost the opener 3-1 on Tuesday.

This was the Blue Jays' first playoff appearance since 2016.

Ryu went 5-2 with a 2.69 ERA in his first regular season with the Blue Jays, who handed him a four-year, US$80 million contract in pursuit of a high-end starter. It was the largest deal for a pitcher in franchise history, and Ryu, the runner-up in the 2019 National League Cy Young Award voting, gave the Blue Jays just the kind of stability and consistency that they'd sought at the top of the rotation.

It was a far different script in the postseason, though.

Ryu was helpless against the aggressive Tampa Bay hitters, who swung early in the count and didn't allow Ryu to get into any rhythm.

The first three Rays batters all hit singles, the one saving grace for Ryu being leadoff man Mike Brosseau getting thrown out at second when he tried to stretch the hit into a double. The fourth hit of that inning, by No. 5 hitter Manuel Margot, put the Rays up 1-0.

Ryu escaped a bases-loaded jam later in the first inning, caused by shortstop Bo Bichette's throwing error, and kept it a one-run affair.

The Rays weren't done hitting against Ryu. Kevin Kiermaier led off the second inning with a single, and then Mike Zunino, batting ninth and carrying a .147 batting average from the regular season, got a juicy 0-2 fastball that he drove over the left field for a two-run dinger. 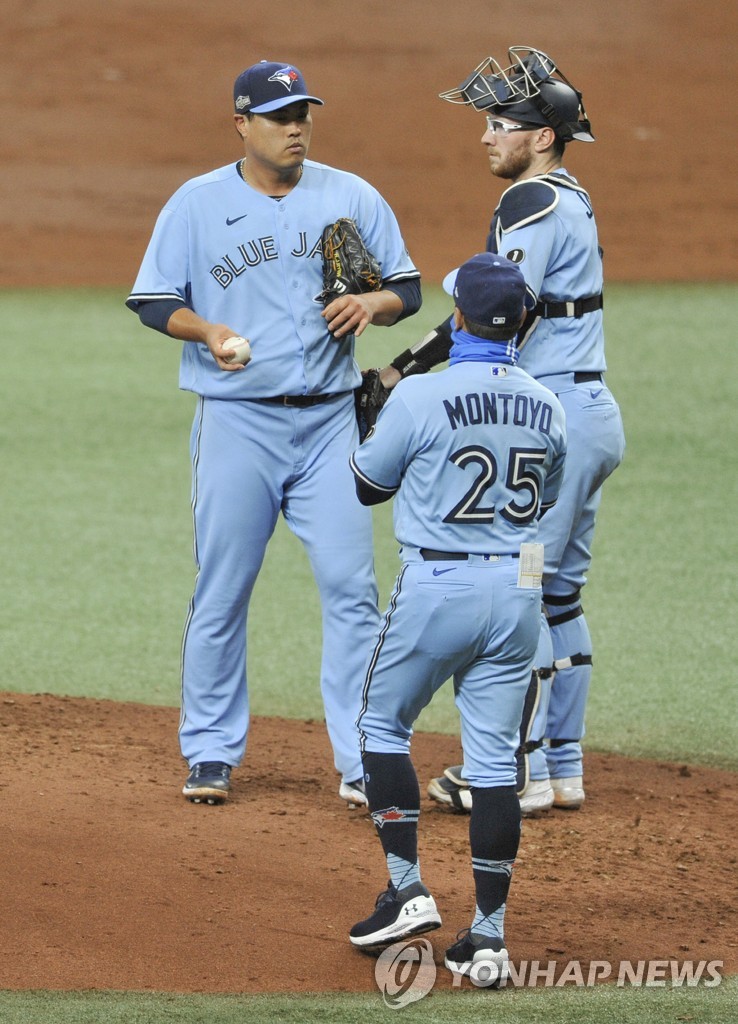 Catcher Danny Jansen set up high and asked for a pitch up in the zone, but Ryu left it at belt high on the inner part of the plate. With the pitch at just 88 mph, Zunino had no trouble getting his barrel on it.

Another error by Bichette allowed the Rays to load the bases against Ryu, who then gave up a grand slam to Hunter Renfroe that opened up a 7-0 lead for the Rays. But to blame Ryu's disastrous start on Bichette's miscue would be oversimplification, for Ryu also didn't help himself despite getting an extra day of rest for this start. Before that error, Ryu gave up a double and a four-pitch walk to put two runners aboard, and he was pulled after Renfroe's slam.

In a much-scrutinized decision, the Blue Jays held out Ryu, their No. 1 starter from the regular season, for Game 1 and instead gave him the Game 2 assignment on five days' rest. The conventional wisdom has it that teams should go with their best starter available for the first game of a postseason series, given the importance of winning the opener. But the Blue Jays defended their move as a strategic decision that would ensure a matchup advantage with multiple bullpen options, while giving Ryu, coming off a season-high 100 pitches in his final regular season start against the New York Yankees, an additional day off. 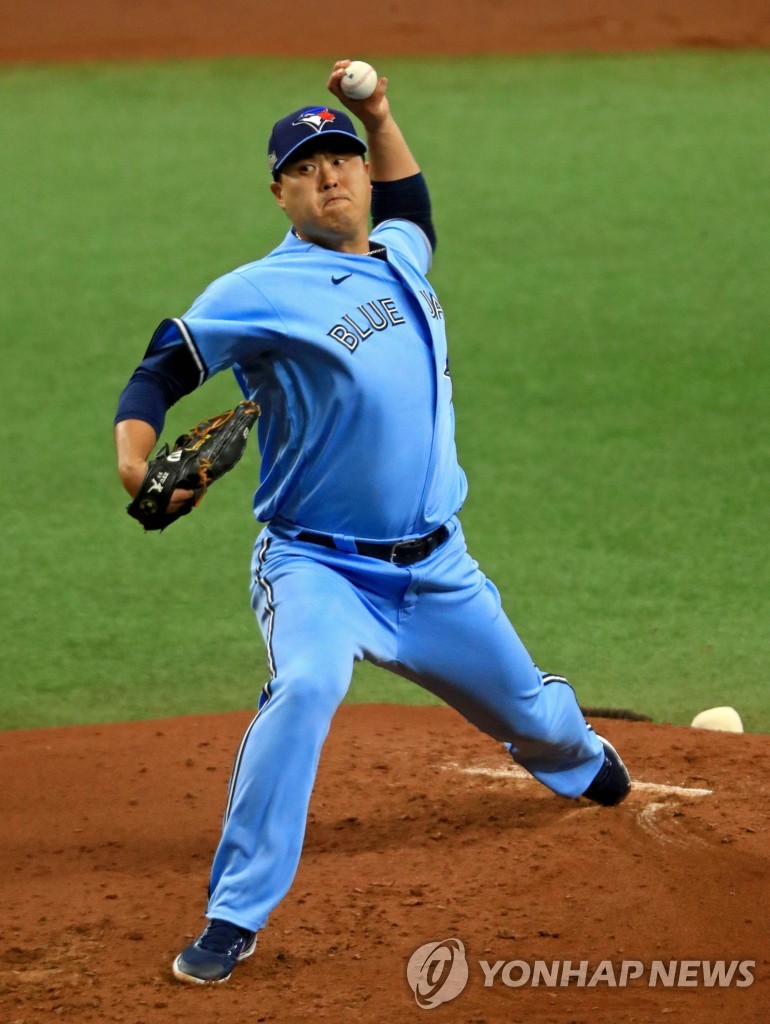 Game 1 starter Matt Shoemaker did his part by throwing three shutout innings before handing the reins to the bullpen. The offense, which went 0-for-5 with runners in scoring position, was the bigger culprit in the loss.

That put Ryu in an unenviable position where he had to keep the Blue Jays alive in the postseason. The Blue Jays wouldn't have wanted any other starter in that situation.

But it wasn't Ryu's day. His bread-and-butter changeup generated zero whiffs, and four of Ryu's five changeups were put in play, leading to two singles and two errors by Bichette. Ryu also had trouble commanding his cutter while throwing it 38 percent of the time, more than any of his five pitch types.

And for one of the very few times in 2020, Ryu couldn't come through for his club. And he won't get another opportunity this year. 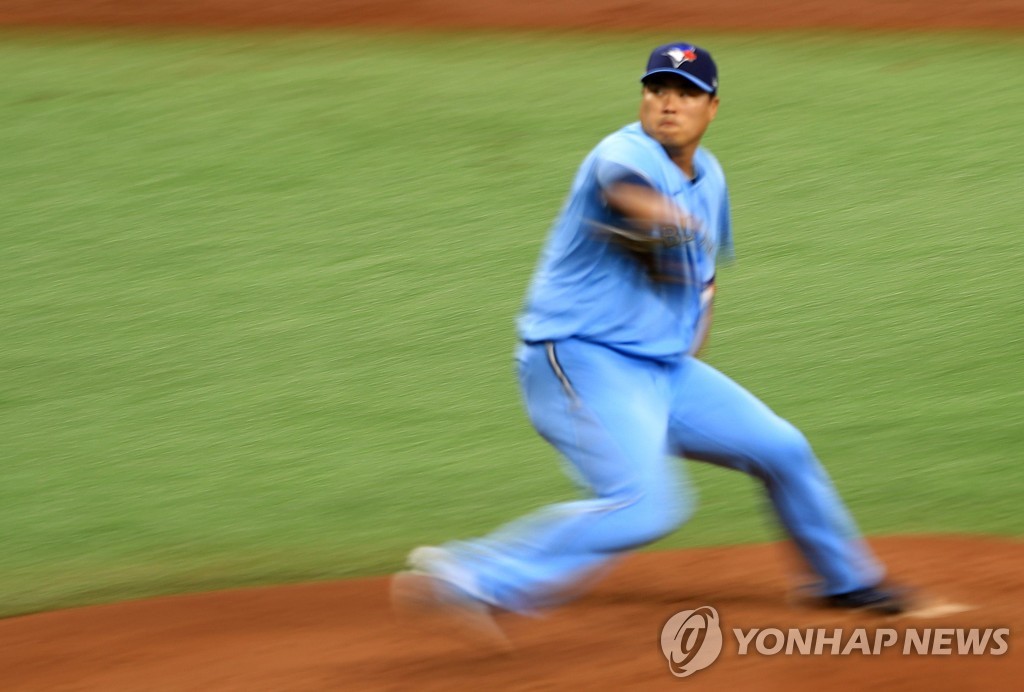