Moon said in the about 20-minute phone conversation that Yoo is the best person who can develop and bring back confidence in the world trade body.

Yoo has vowed to focus on rebuilding trust in the multilateral trading system by making it more relevant, resilient and responsive if she gets picked as the new director-general. 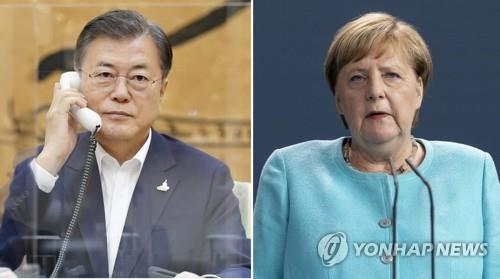 Yoo is competing with candidates from Nigeria, Kenya, Saudi Arabia and Britain in the second round of the elimination process, which is set to run through next Tuesday.

In the second round, three out of five candidates will be removed, leaving just two runners in the third and final stage for the top post of the global trade body.

Merkel told Moon that she thinks Yoo is a qualified candidate who has expertise for the top job of the WTO, according to the presidential office.

Yoo was appointed as trade minister in February last year, becoming the first woman to take the top-ranking position in the 70-year history of South Korea's trade ministry.

Last month, Moon also sent a letter to Germany seeking for its support for Yoo's bid.

Her bid comes amid escalating trade tension between the United States and China, and a frayed relationship between South Korea and Japan.

Last month, Yoo visited the U.S. to secure Washington's support for her campaign to become the next director-general of the WTO.

U.S. support is widely seen as crucial in winning the top post of the WTO, as the U.S. is the biggest contributor to the WTO in terms of budget.

In 2018, Moon met with Merkel in Brussels, Belgium, on the sidelines of the Asia-Europe Meeting.