In a memorandum to his top diplomat Mike Pompeo, Trump said he has determined the U.S. "will not provide nonhumanitarian, nontrade-related assistance" to the countries "until such governments comply with the Act's minimum standards or make significant efforts to bring themselves into compliance with the minimum standards."

The only exception, he said, will be determined for necessary assistance with the COVID-19 pandemic and the Ebola virus. The countries include Burundi, China, Cuba, Eritrea, Iran, Nicaragua, Russia and Syria.

The instruction will affect the entire fiscal year 2021, which began Thursday, according to the memorandum released by the White House.

The State Department had named North Korea and 18 other countries as the worst in terms of protection for victims of human trafficking in its annual report published in June.

In his memorandum, dated Sept. 28, the U.S. president also instructed American heads of multilateral development banks, including the International Monetary Fund, to "vote against and use best efforts to deny any loan" to any of the listed countries unless such funds are designed to be used for humanitarian purposes. 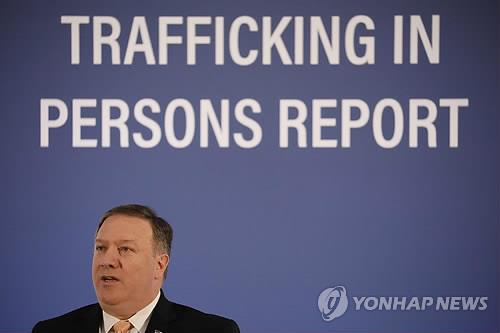