SEOUL, Oct. 3 (Yonhap) -- First lady Kim Jung-sook of South Korea expressed hope Saturday that her country and India will further strengthen their partnerships for peace and prosperity in the world.

She was speaking in a video message for an international webinar held as part of the 150th birth anniversary celebrations of Mahatma Gandhi.

Kim noted that South Korea and India have worked together to further bolster their "special strategic partnership," especially on the basis of "friendship and mutual trust" between the leaders of the two sides -- President Moon Jae-in and Prime Minister Narendra Modi.

"In the midst of the global pandemic, we have reconfirmed our strong bilateral ties," she said, referring to the response to COVID-19.

Kim added, "As in the verses of the great Indian poet Rabindranath Tagore, I truly hope that Korea and India will become the lamp that contributes to the peace and prosperity not just in Asia but around the world." 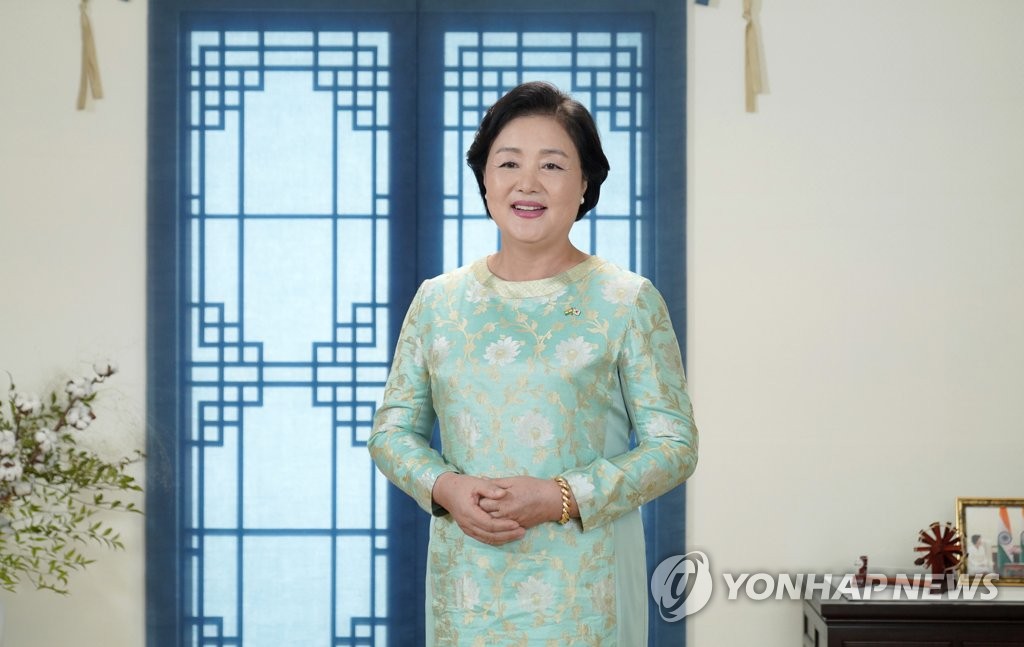 Tagore called South Korea the "Lamp of the East."
South Korea and India mark the 47th anniversary of establishing diplomatic ties this year.

Modi joined the webinar, hosted by the Indian Council for Cultural Relations (ICCR), with the theme of "Weaving Relations: Textile Traditions."

It was the last official event to commemorate Gandhi on the occasion of his 150th birth anniversary, according to Cheong Wa Dae.

Last year, Moon attended a special event to honor Gandhi that took place in New York on the sidelines of the U.N. General Assembly.

In 2018, the first lady made a solo visit to India at the invitation of Modi to join the Diwali festival of lights as chief guest.