SEOUL, Oct. 3 (Yonhap) -- Defense Minister Suh Wook visited the inter-Korean border village of Panmunjom on Saturday, his office said, ahead of the expected resumption of a civilian tour program in the area.

Suh visited the southern side of the Joint Security Area (JSA) inside the Demilitarized Zone (DMZ) bisecting the two Koreas for the first time since taking office last month. Also accompanying him was the United Nations Command (UNC) Commander Gen. Robert Abrams.

"When the JSA security tour resumes, we ask you to make every effort to ensure that our military can make peace with strong strength, comprehensively in consideration of the safety of our people in accordance with the COVID-19 situation and inter-Korean relations," his ministry quoted him as saying.

"I also ask you to fulfill your duties based on the strong South Korea-U.S. alliance so that the bold journey toward peace can restart at Panmunjom, a symbol of peace and harmony on the Korean Peninsula since the Panmunjom Declaration and the 9.19 Military Agreement," he said, referring to the two signature inter-Korean agreements signed under the Moon Jae-in government.

The minister also visited the Neutral Nations Supervisory Commission, an armistice monitoring panel launched with the truce to halt the 1950-53 Korean War, and had a brief meeting with officials there.

Saturday's visit was seen as part of efforts to check the preparedness and readiness posture and to encourage officers and men at the border posts, as the civilian tour program at the sites are expected to resume soon.

The U.S.-led UNC said early this week that it had authorized the resumption of the tour program on eased concerns over African swine fever, with the exact date of reopening to be announced soon.

Tours to the JSA and other sites inside the DMZ have remained suspended since September last year in an effort to stem the spread of the highly contagious animal disease. 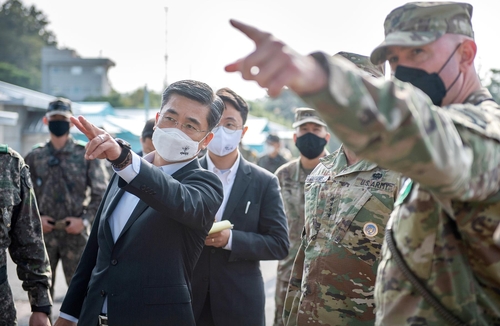