SEOUL, Oct. 4 (Yonhap) -- LG Electronics Inc. said Sunday its new dual-screen smartphone will go on sale in South Korea this week as the tech firm aims to boost its handset sales amid the pandemic.

In the United States, the Wing will be released on Oct. 15, the company added.

LG already announced there would be no preorder reservations for the Wing. Instead, the company decided to hold a promotion for the full month of October, which gives Wing buyers a 70 percent discount coupon if they have to replace the display of the phone within two years after purchase.

The Wing, which was unveiled on Sept. 14, is highlighted by its two separate displays, with the main screen swiveling 90 degrees horizontally to reveal a secondary screen under it and creating a T-shape design.

It is equipped with "gimbal motion camera" technology with six motion sensors, which gives a great level of stabilization especially when users shoot videos with the device. 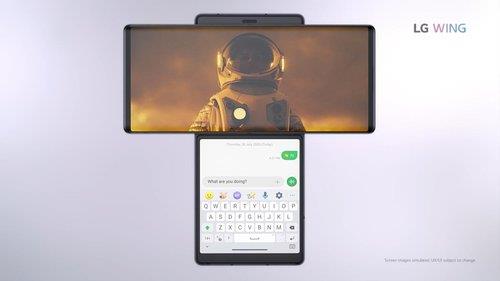