SEOUL, Oct. 4 (Yonhap) -- South Korean steelmakers are expected to have performed better in the third quarter despite the new coronavirus fears, moving on from a slump a quarter ago, analysts said on Sunday.

The country's major steelmakers are likely to have earned more in the July-September period, thanks to a rebound in global steel demand, according to the analysts.

POSCO, the world's fifth-biggest steelmaker by output, is forecast to have logged 492.9 billion won in operating profit on a consolidated basis, according to the brokerage consensus compiled from Yonhap Infomax data.

The figure almost tripled from 167.7 billion won in the April-June period, when the conglomerate suffered its first-ever operating loss on a standalone basis.

Hyundai Steel Co., South Korea's second-biggest steelmaker by output, is estimated to have logged 18.9 billion won in operating profit, up 35 percent from an operating income of 14 billion won the previous quarter.

Dongkuk Steel Mill Co. is expected to have posted 61.2 billion won in operating profit, slightly down from the 62.2 billion won a quarter ago. South Korea's third-biggest steelmaker kept up its sturdy performance in both quarters despite the pandemic's fallout. 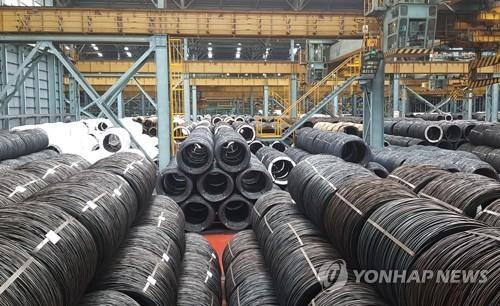 "A decline in Chinese steel exports raised the global demand for steel," said a steel company official who is close to the matter.

"The improving Chinese economy pushed up steel prices in China, directing Chinese steelmakers' focus back on their domestic markets," the official added.

In addition to the uptick forecast, local analysts noted that the steelmakers may suffer some difficulties from the price hikes in raw materials.

The recent price of iron ore in Qingdao, China, hovered around the US$130-level, sharply up from $70 in April last year.

The price of coal, the second-most used material in steelmaking after iron ore, surged to $134.55 per ton as of Thursday, up 27 percent from a month ago.