Local carmakers accounted for 8.9 percent of the U.S. passenger car market during the cited period, up from the 7.7 percent during the December-February period, the Korea Automobile Manufacturers Association (KAMA) said in a statement.

South Korea reported its first confirmed coronavirus case on Jan. 20, with its total caseload reaching 24,091 as of Monday.

Most car-manufacturing plants in the United States were suspended from March to May to stem the spread of the unprecedented respiratory illness.

But they continued to operate their domestic plants during the period as Seoul has managed the virus outbreak at low levels compared with other governments.

In the fourth quarter, however, Hyundai and Kia may face tough competition with their rivals, such as Toyota Motor Corp. and General Motors Co. in the world's most important automobile market as the rival carmakers have begun operations in their plants.

Hyundai, its independent Genesis brand, and Kia sold 883,060 vehicles in the U.S. market in the January-September period, down 10 percent from 984,863 units a year earlier. 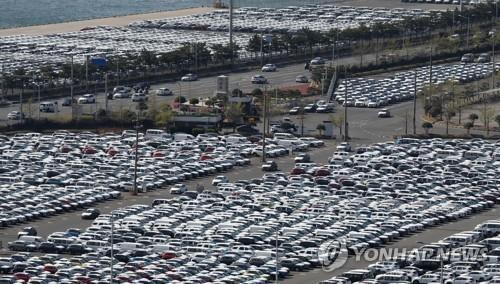