SEOUL, Oct. 5 (Yonhap) -- The government will terminate its temporary service that allows foreign spouses of South Koreans whose short-term visas are close to expiry to apply for marriage migrant visas while staying in the country, starting next week, the justice ministry said Monday.

South Korea has temporarily allowed foreign spouses who entered the country with short-term visas to change their visas to marriage migrant visas (F-6) since late May, as it became harder for them to re-enter the country due to the COVID-19 pandemic.

The ministry will end the service on Oct. 16 apparently as more countries have relaxed their border restrictions.

Foreign spouses who qualify for F-6 visas and entered the country before April 12 with such short-term visas as visa exemption (B-1), a tourist visa (B-2) and a short-term visit visa (C-3) should finish the application process by Oct. 16 if they wish to apply, according to the ministry.

Those who fail to leave the country after their visas expire due to reasons stemming from COVID-19 could be granted extensions of their short-term stay, the ministry added.

Applicants can sign up for the service at immigration offices in their areas. 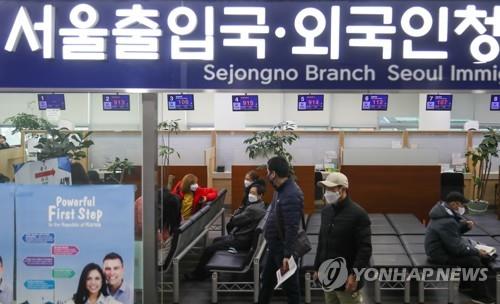