SEOUL, Oct. 5 (Yonhap) -- The police chief said Monday that cordoning off a main public plaza in central Seoul on Saturday was inevitable in the country's fight against the coronavirus, refuting criticisms from opposition politicians that the measure stymied people's right to assemble.

No large-scale anti-government rally was held at Gwanghwamun Square on National Foundation Day as some 300 police buses sealed off the area and subway trains passed without stopping at nearby stations to prevent protesters from gathering there.

Some conservative groups instead staged drive-thru rallies in small groups across the capital to protest government policies.

During a meeting with reporters, Kim Chang-yong, commissioner general of the National Police Agency, said the measure put in place at Gwanghwamun was "an inevitable choice to minimize" potential risks arising from large crowds assembling in the middle of a pandemic.

"Banning illegal rallies was a crucial task to prevent the infectious disease from spreading and protect law and order," he stressed.

To do so, the police did not have many options on the table, except for completely sealing off streets leading to the popular protest area by lining up police buses close together, he said. While he conceded that there were opinions critical of what some saw as an "excessive" response, he said the police could not "tolerate" illegal rallies taking place. 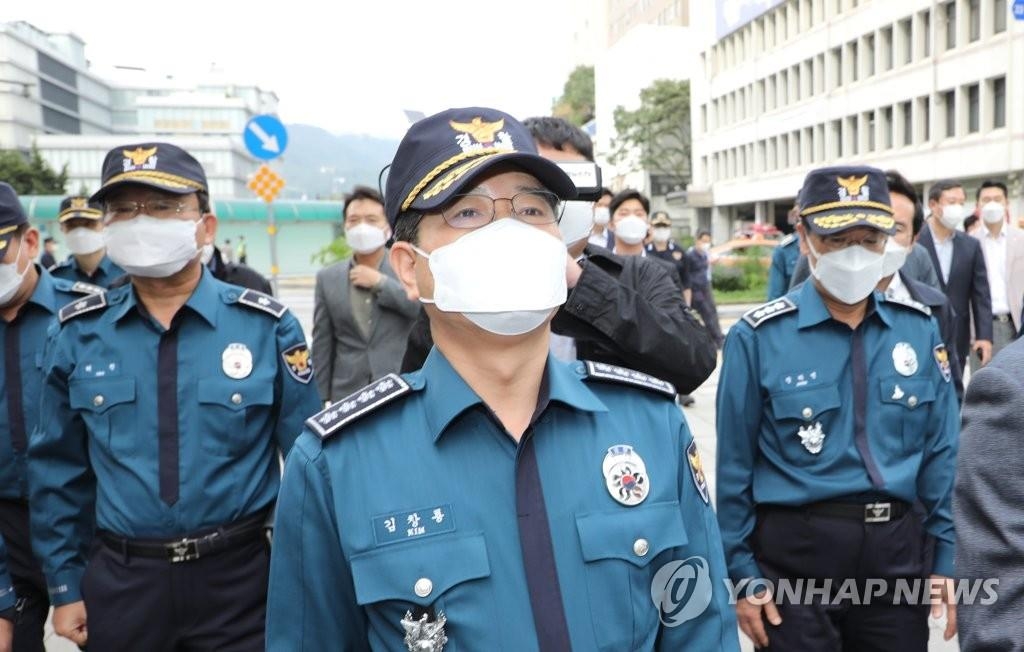 The massive anti-government rallies that were held in central Seoul on Liberation Day on Aug. 15 have led to more than 600 new cases nationwide, sparking concerns among health experts that allowing rallies could result in a resurgence of COVID-19.

Given that, the commissioner general said the police were considering using the same tactic to stop other rallies planned by some conservative groups for Friday, the national holiday marking the creation of the Korean alphabet. The police have so far banned 102 out of 1,096 rallies in Seoul planned for Hangeul Day.

"Health authorities have already banned any assembly to lower the risk of the coronavirus outbreak, and police have been issuing a notice banning any assembly accordingly," he said.

Meanwhile, the police will have around 1,000 policemen who worked in the cordoned area on Saturday get tested for the coronavirus as a precautionary measure.