SEOUL, Oct. 5 (Yonhap) -- President Moon Jae-in expressed his appreciation Monday for South Korean people's cooperation in the fight against the novel coronavirus during the Chuseok holiday season and requested continued support for the government's antivirus campaign.

He cited another holiday that will start Friday, which is Hangeul Day, or the Korean Alphabet Day, while speaking in front of pool reporters and cameras during a weekly meeting with his senior Cheong Wa Dae aides. 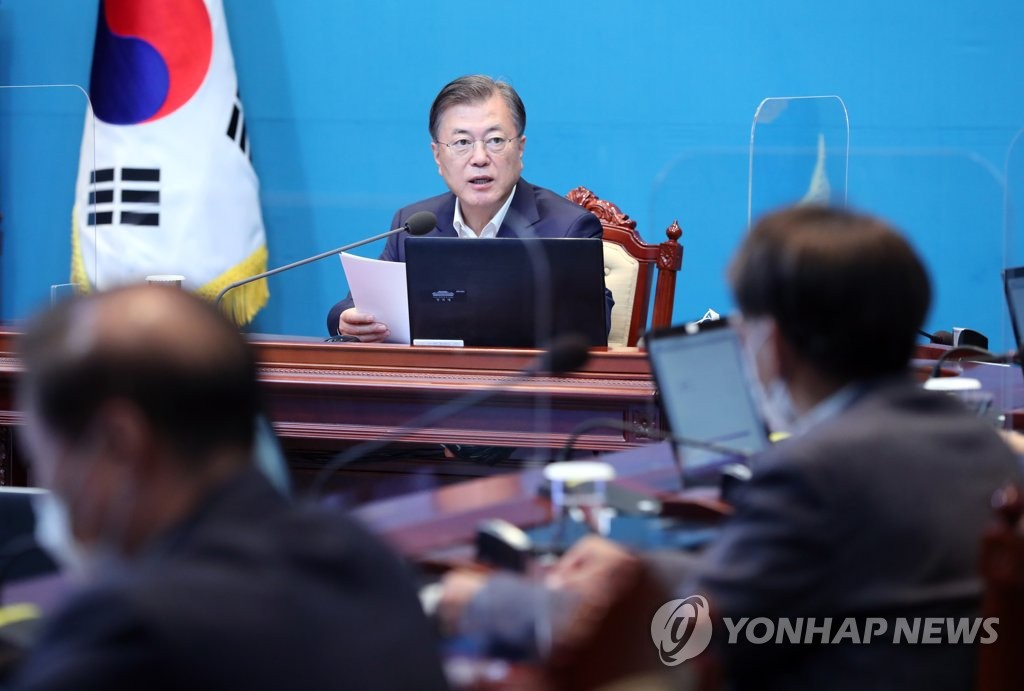 Many South Koreans refrained from visiting family members or traveling during the extended Chuseok holiday, or the Korean equivalent of Thanksgiving Day.

A daily average of 5.19 million people migrated over the six days through Sunday, a 19.3 percent reduction from last year's Chuseok period, statistics compiled by the government showed.

However, more than 31 million people made journeys, short or long, during the season, Moon pointed out.

"The special coronavirus prevention period for the Chusoek holidays will continue through this weekend, and it's the time to minimize the spread of the virus," he emphasized.

Regarding worries about reported attempts for illicit street protests in Gwanghwamun, central Seoul, on National Foundation Day on Saturday, Moon said police have "blocked" them without a loophole via thorough preparations so they won't trigger the spread of coronavirus infections.

South Korea will be able to get out of the two-month-long crisis of a resurgence in coronavirus cases and gradually enter the "stabilization stage" only when the people join hands and ensure a downward trend despite their difficulties and inconveniences, the president added.

"The reason why our antivirus efforts are regarded as an example for the world is because we are faring well in the economy as well," he said, adding those positive results are due to active public cooperation.

Meanwhile, he said his government will redouble its push for the goal of turning South Korea into a digital and content power.

The country ranked eighth in the 2020 World Digital Competitiveness Assessment released by the Swiss International Institute for Management and Development (IMD), a two-step rise from the previous year.

Moon said the government will achieve the "great transformation" of South Korea from a follower economy to a pacesetter via its digital economy drive.

"Our goal of a digital powerhouse and content renaissance era is not a thing of a distant future," he said.