The September tally accelerated from a 0.7 percent on-year gain in August, according to the data released by Statistics Korea.

Core inflation, which excludes agricultural and petroleum products, went up 0.9 percent from a year earlier. 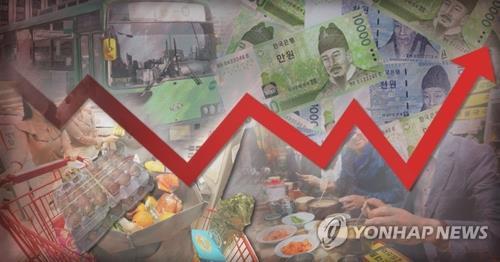 In September, prices of vegetables and agricultural goods jumped to a near 10-year high in the wake of heavy rains.

Prices of fresh food soared 21.5 percent on-year in September, marking the sharpest gain since February 2011, according to the data.

Accelerating inflation may give the Bank of Korea (BOK) less room to ease its monetary policy.

The BOK has sharply lowered its growth outlook for the nation's economy this year and froze its policy rate at a record low, as uncertainties heightened over spiking virus cases.

The BOK expected the nation's economy to contract 1.3 percent this year. The latest growth projection marked a sharp cut from the central bank's estimate in May of a 0.2 percent contraction.

(LEAD) S. Korea's Sept. inflation rises by most in 6 months

(LEAD) S. Korea's Sept. inflation rises by most in 6 months