SEOUL, Oct. 6 (Yonhap) -- Lee Kee-heung, head of the South Korean Olympic committee, has declared his intent to run for a second term, even if it means losing his membership with the International Olympic Committee (IOC).

Lee, who has spent two decades in sports administration, was elected as president of the Korean Sport & Olympic Committee (KSOC) in October 2016. His four-year term concludes at the end of this year, and the next election is scheduled for January 2021.

Under the current KSOC statutes, an incumbent KSOC president must first resign 90 days before a reelection if he or she wants to pursue a second term. Lee's election to the IOC in 2019 was linked to his function within the KSOC, and he will have to remain as KSOC chief to retain his IOC membership. Now that Lee is going for his second term, he will first have to step down from his KSOC perch, meaning he will lose his IOC membership. 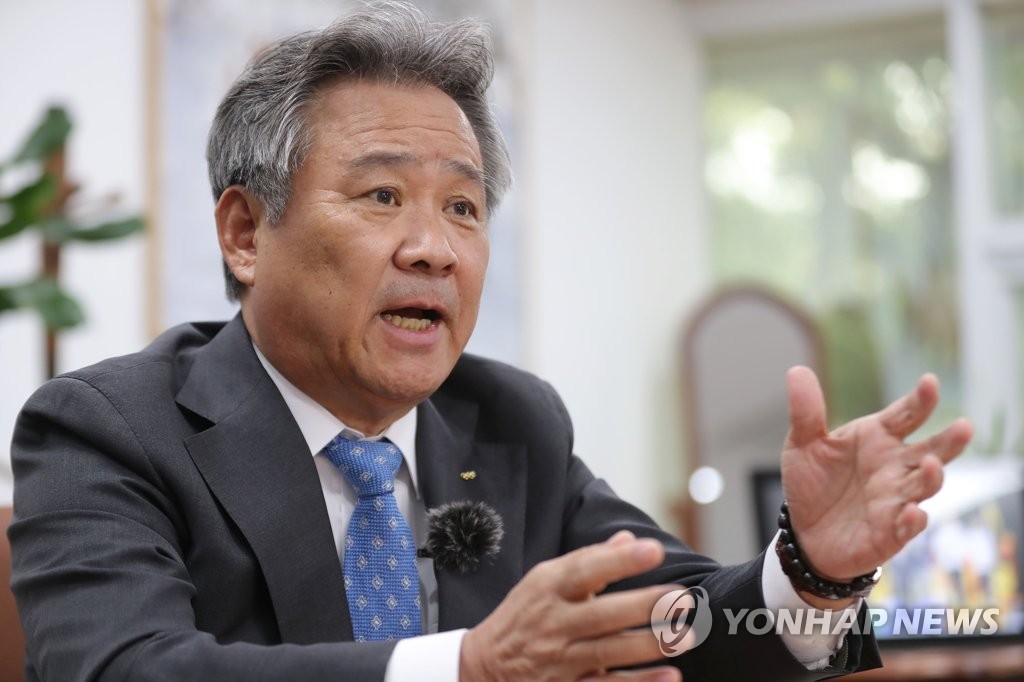 In an interview with Yonhap News Agency last week, Lee said this was no time to leave the KSOC.

"This is my 20th year in sports administration, and I've done everything I could have done as someone who wasn't an athlete," said Lee, former head of the South Korean governing bodies for canoeing and swimming. "But there are too many pressing issues in sports that I felt it would be irresponsible for me to step aside."

The KSOC has asked the Ministry of Culture, Sports and Tourism to amend the part of the statutes guiding its presidential election, so that the current head won't have to resign to run for a second term but will instead only be suspended from duties during the election campaign. In that case, Lee wouldn't have to give up his IOC membership for his KSOC campaign, and if he's reelected to the top KSOC job, he'll remain an IOC member for four additional years as well.

But the ministry hasn't approved those changes, citing the need to ensure fairness in the election. The ministry's drive to split up the KSOC into two entities -- one handling elite sports and the other overseeing sports for all -- and the KSOC's pushback also appear to be tied to the ministry's reluctance.

The situation even prompted the IOC's National Olympic Committee (NOC) Relations Department to write a letter to the KSOC in its support of Lee, calling for unity rather than division of the organization. The letter also pointed out that under the Olympic Charter, all national Olympic bodies must be autonomous organizations that are free from any undue pressure, and urged the South Korean government to resolve the issue promptly. 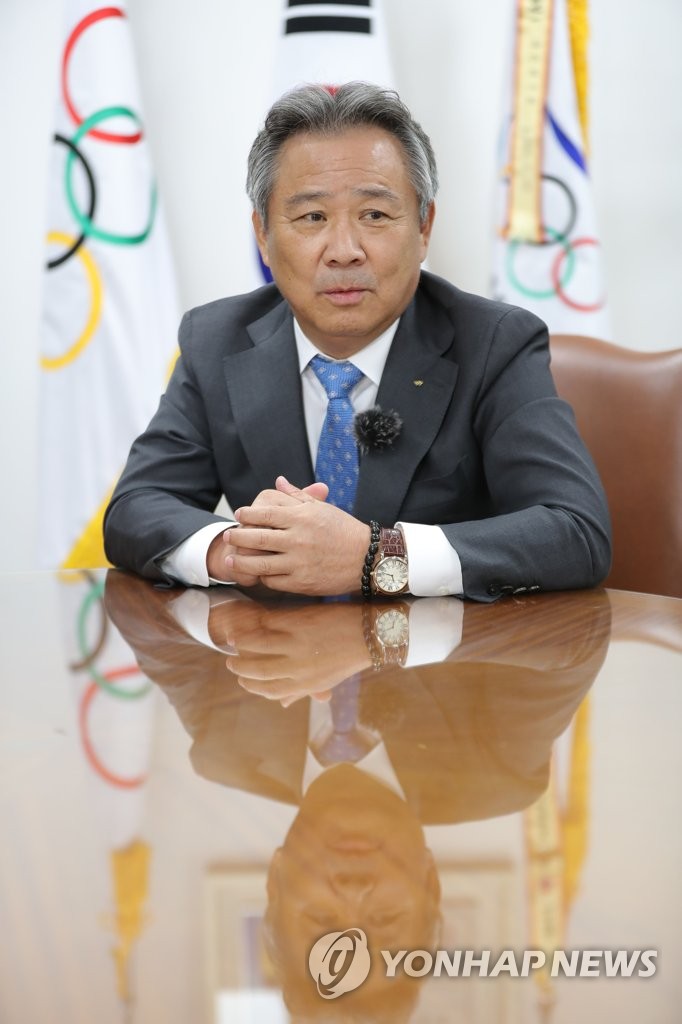 "There are other deserving people (for IOC seats)," Lee said, when asked if he was really willing to lose his IOC membership to run for his second KSOC term. "The best-case scenario (without the sports ministry's changes) is for me to groom someone to succeed me as an IOC member. I am close enough with the IOC to have those kinds of conversations."

Lee, who served as the head of the South Korean delegations to the 2010 Asian Games and the 2012 Summer Olympics, is one of two South Korean IOC members. Former Olympic table tennis champion Ryu Seung-min has been on the IOC's Athletes Commission since 2016, and commission members can only serve a single eight-year term. 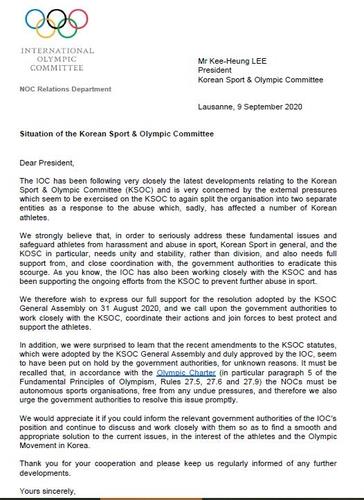 Other IOC members are elected for eight years, and their mandates can be renewed. Except for those elected between 1966 and 1999, the age limit for members is 70. The IOC may extend that limit for a period of four years upon a proposal from the Executive Board.

Lee said he would lose his IOC seat anyway if he chose not to run for his KSOC term and claimed no other IOC member country has such a restrictive rule on its national Olympic chief.

"I think this is a matter of principle," Lee said. "The ministry should decide quickly whether the amendments are appropriate or not."

On Lee's watch, two major scandals rocked South Korean sports: a sexual and physical abuse case against former national short track coach Cho Jae-beom and an assault case against a regional triathlon club that drove a young athlete to take her own life.

These incidents only fueled the sports ministry's push to break up the KSOC. Lee acknowledged that abuses of any form have no place in sports but splitting his organization isn't the answer. 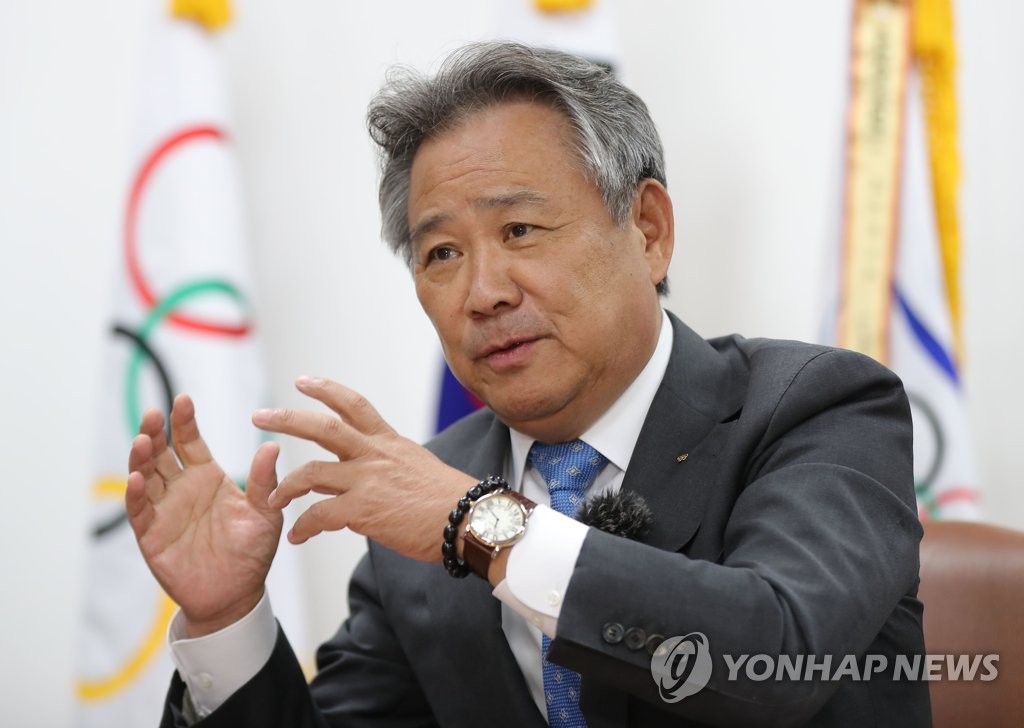 "These cases are really unfortunate but splitting the KSOC will only cause more problems," Lee said. "The sports ministry should give us time and space to work on these issues. When these incidents came to light, all sports administrators were portrayed as troublemakers and even criminals. But we have made significant contributions to society. We've done the best we could under the circumstances."

Lee called for the creation of a separate national sports entity, under the auspices of the Prime Minister's Office, or a standalone Ministry of Sports. He noted that more than a dozen government ministries oversee different aspects of sports-related policy, including the education ministry, the defense ministry and the gender ministry.

"It would be more efficient to have a single organization that can handle sports policy," Lee said. "We've only had the integrated KSOC for four years, and splitting it up would affect 10,000 different organizations. I don't understand why the government is trying to create these problems."