SEOUL, Oct. 6 (Yonhap) -- South Korea's drug and health authorities said Tuesday that some seasonal flu vaccines that were mishandled during storage have passed quality tests and the country will next week resume a scheme to offer free flu shots.

The Ministry of Food and Drug Safety and the Korea Disease Control and Prevention Agency (KDCA) conducted vaccine potency testing and concluded that there is no safety issue.

In accordance, a nationwide free flu shots program will be resumed sometime around next Monday, they said. The vaccines will first be administered to those in the 13-18 age bracket, followed by the older demographics. 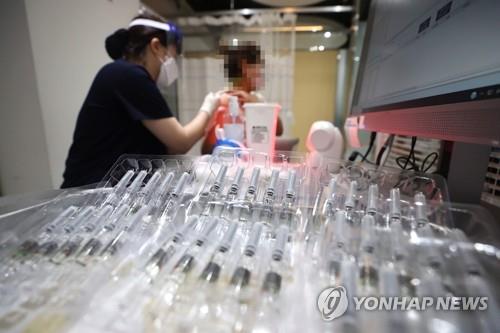 The program was halted on Sept. 22 after some of the inactivated vaccines were exposed to room temperature during shipping, stoking concerns over decreased vaccine potency.

For the testing, the vaccine bottles were exposed to various temperatures, such as 25 and 37 Celsius, the ministry said. It was confirmed that the vaccine potency has maintained at 25 C over a period of 24 hours, it added.

The mishandled bottles were all partially exposed to 25 C for less than 24 hours, it said.

Despite such test results, the ministry said it will collect 750,000 doses that could potentially have low potency as part of precautionary measures.

The ministry said 3,045 people had received such vaccines as of Monday, up 749 from a day earlier.

The number of people who have reported abnormal reactions, such as a fever and chills, has stayed at 12 since last Wednesday.

The authorities said they will come up with measures to prevent such mishap in the future, adding that Shinsung Pharm. Co., the distributor of such vaccines, will face punishment.

The KDCA has earlier assured that there is very slim chance of the potentially faulty flu vaccines causing health risks.

Starting early September, the country has provided free flu shots, mostly for young children, in an effort to increase the number of immunized people.

As winter approaches, and as respiratory viruses, including influenza and COVID-19, have nearly identical symptoms, such as a fever and sore throat, it is difficult for people to determine which virus they might have without getting tested.
(END)