SEOUL, Oct. 6 (Yonhap) -- A New Zealand man urged a South Korean diplomat accused of committing sexual assault to return to Wellington to stand trial, according to the man's lawyer on Tuesday.

The local employee at the South Korean Embassy in the capital has accused the diplomat of groping him three times in 2017 when he was stationed there. The case has drawn keen public attention, especially since New Zealand Prime Minister Jacinda Ardern raised it during her phone talks with President Moon Jae-in in July.

The diplomat was recently summoned to Seoul, having stepped down from a post in the Philippines.

In a statement released to media, Louise Nicholas, the New Zealander's counsel, said it was "disappointing" that the diplomat has not yet returned to Wellington.

"The truth will never be found if Korea doesn't also listen to the victim's account of what happened. This is why (the diplomat) must return to New Zealand to answer the charges in the New Zealand Courts," the counsel said.

The accuser also hopes that the matter will be thoroughly probed during South Korea's parliamentary audit on the foreign ministry, slated for Wednesday, so that it can lead to the accused diplomat returning to New Zealand, according to his counsel.

South Korea's human rights watchdog acknowledged in its own report on the case that the ministry had shortcomings in the handling of the case.

New Zealand police have charged him with indecent assault and court warrants have been issued for his arrest. New Zealand has not officially requested the extradition of the diplomat. 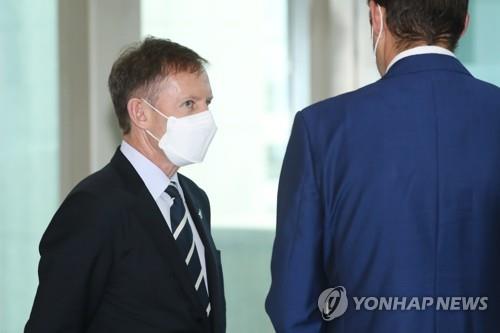