WASHINGTON, Oct. 6 (Yonhap) -- North Korea has never had any intention of giving up its nuclear weapons and the time to rid the communist state of its nuclear ambition may be running out, a former national security adviser to U.S. President Donald Trump said Tuesday.

John Bolton also argued the communist state has only used leader Kim Jong-un's relationship with Trump to buy time for perfecting its nuclear and missile capabilities.

"They have not made any steps toward denuclearization. There has never been any evidence North Korea has made a strategic decision to give up nuclear weapons," the former Trump aide said in a virtual conference of the Wall Street Journal CEO Council Summit.

"In fact, over the two and a half years of bromance between Kim Jong-un and Trump, North Korea simply used that opportunity to perfect their ballistic missile and nuclear weapons programs," added Bolton. 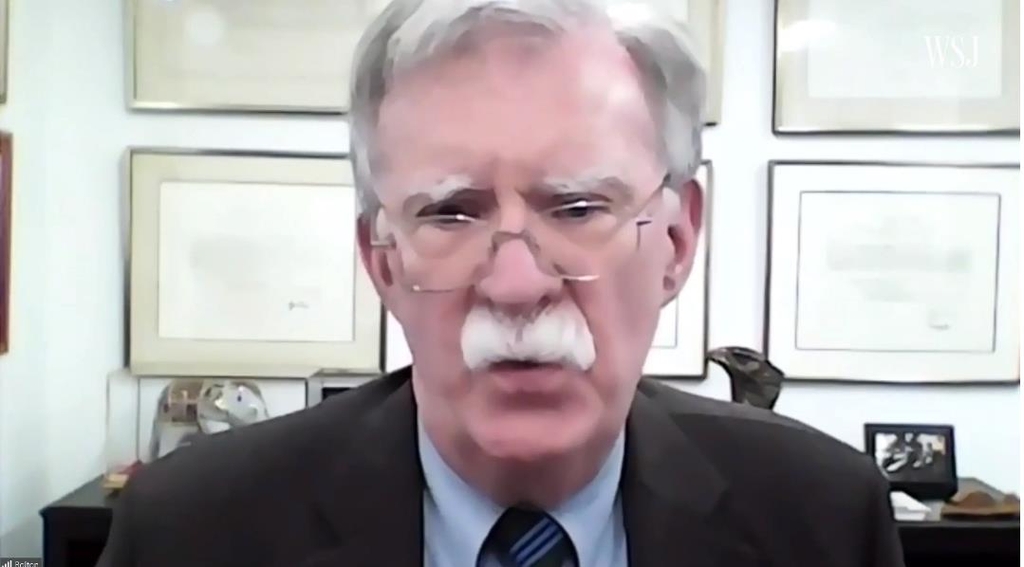 Trump and Kim have held three meetings, including two bilateral summits held in June 2018 and February 2019.

Their meetings had been widely publicized as historic as they also marked the first and second-ever U.S.-North Korea summits.

They, however, have stalled since the second Trump-Kim summit in Hanoi ended without a progress.

Bolton noted the North may have yet to acquire all the capabilities it needs, but said the time to rid the communist state of its nuclear weapons was running out quickly.

"I think we still have a little bit of time but it's getting vanishingly small," he told the virtual meeting.

Bolton insisted the U.S. should have moved earlier, claiming the North never had intention of giving up its nuclear weapons programs in the first place.

"We should have moved earlier before it became a threat, but people kept saying 'no, we can negotiate with North Korea.' That was nonsense from the get go," he said.

Should North Korea obtain its much sought nuclear capabilities, the world will face serious problems of proliferation, he argued.

"And now the consequences, they will have that capability, and as impoverished as they are, they're prepared to sell it to anybody with hard currency," said Bolton.

Pyongyang continues to maintain a moratorium on its nuclear and long-range missile tests since late 2017, but has declared having perfected such capabilities.

In a recent speech before the U.N. General Assembly, North Korea's ambassador to the world body said his country has secured a guarantee for its own security based on "absolute strength."

""Based on its reliable guarantee for safeguarding the security of the state and people, the DPRK is now directing all its efforts to economic construction," the North Korean diplomat, Kim Song, has said, adding the country will not give up its "dignity" for mere economic concessions.

N. Korea has no intention of giving up nuclear weapons: Bolton

N. Korea has no intention of giving up nuclear weapons: Bolton