SEOUL, Oct. 7 (Yonhap) -- The National Assembly kicked off its annual inspection of the government and state agencies Wednesday for a 20-day run.

On the first day of the audit, 14 of the assembly's 17 standing committees will hold inspection hearings to scrutinize the management of the central and regional governments as well as their agencies.

The Legislation and Judiciary Committee, the National Defense Committee and the Strategy and Finance Committee will be among the 14 committees to hold inspection hearings on Wednesday to begin with.

Rival parties are expected to square off against one another over a range of recent controversies including the shooting death of a South Korean fishery official by the North Korean military last month. The issue is highly likely to dominate the hearing of the National Defense Committee, set to begin at 10 a.m.

As the parliamentary inspection is conducted amid the COVID-19 pandemic, some of its proceedings have been scheduled in videoconference format, including the Health and Welfare Committee's inspection set for Thursday.

Other thorny issues such as the government's response to the COVID-19 pandemic and extended medical leave granted to the son of Justice Minister Choo Mi-ae during his military service in 2017 are also expected to come under intense scrutiny throughout the parliamentary audit to its end on Oct. 26. 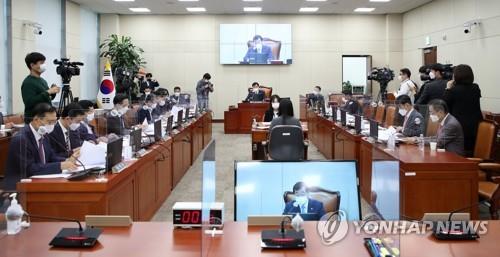