T'way Air will resume services on the routes from Incheon to Osaka and Tokyo on Nov. 5 and Nov. 6, respectively, with a plan to eventually provide flights on routes to Nagoya and Fukuoka, the company said in a statement.

The budget carrier said it will initially offer one flight a week on the routes to Osaka and Tokyo as the new coronavirus outbreak continues to weigh on travel demand. 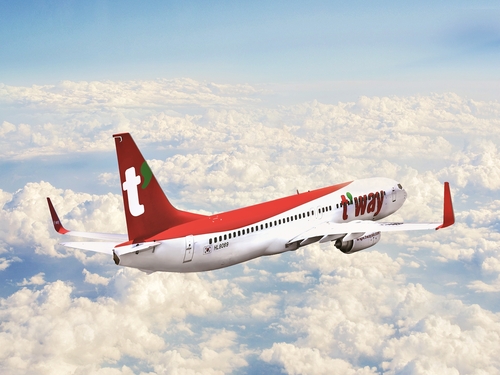 The move comes as Japan agreed to allow businesspeople from South Korea to enter the country without a 14-day coronavirus quarantine starting Thursday.

The special entry procedure comes about seven months after Tokyo slapped entry restrictions on Seoul in early March to stem the spread of COVID-19, further straining the bilateral relations already frayed over wartime history and trade.

T'way Air suspended most of its international routes in March as more than 180 countries and territories strengthened entry restrictions to stem the spread of the COVID-19 pandemic.

T'way began flights to the Chinese city of Wuhan on Sept. 16, marking the reopening of the air service to the epicenter of the virus outbreak after eight months.

(LEAD) T'way Air to start flights to Japan next month

(LEAD) T'way Air to start flights to Japan next month