GENEVA/SEOUL, Oct. 8 (Yonhap) -- South Korean Trade Minister Yoo Myung-hee has made it onto the shortlist of two finalists in the race to become the new director-general of the World Trade Organization (WTO), her office and the organization said Thursday.

The South Korean candidate will now compete with Ngozi Okonjo-Iweala of Nigeria for the top seat. With both candidates being female, the WTO will have the first female chief in its 25-year history.

Member states will now seek to reach a consensus on the final candidate in the third round of selection.

According to the WTO, the final round of consultations will run from Oct. 19 to 27.

Once the final candidate is picked, the WTO member states will then approve the decision during a general council meeting. The process is expected to be completed in early November.

"Deeply grateful and honored to be selected for the final round in the selection process of the next WTO Director General," Yoo tweeted Thursday.

"We need a capable and experienced new leader who can rebuild trust and restore relevance of the WTO. I look forward to your continued support! Thank you!" she added.

Candidates from Saudi Arabia and Britain failed to be shortlisted for the final round of competition. Three candidates from Mexico, Egypt and Moldova were eliminated from the list in the first round.

The race started after previous Director-General Roberto Azevedo stepped down from the post in August, a year earlier than his original term.

"Our aim continues to be to encourage and facilitate the building of consensus among members, and to assist in moving from this final slate of two candidates to a decision on appointment," General Council Chair David Walker of the WTO said in a statement.

"As this is the final round of the consultation process, it should bring us to the point where we can make a recommendation to the General Council concerning that decision," Walker added. 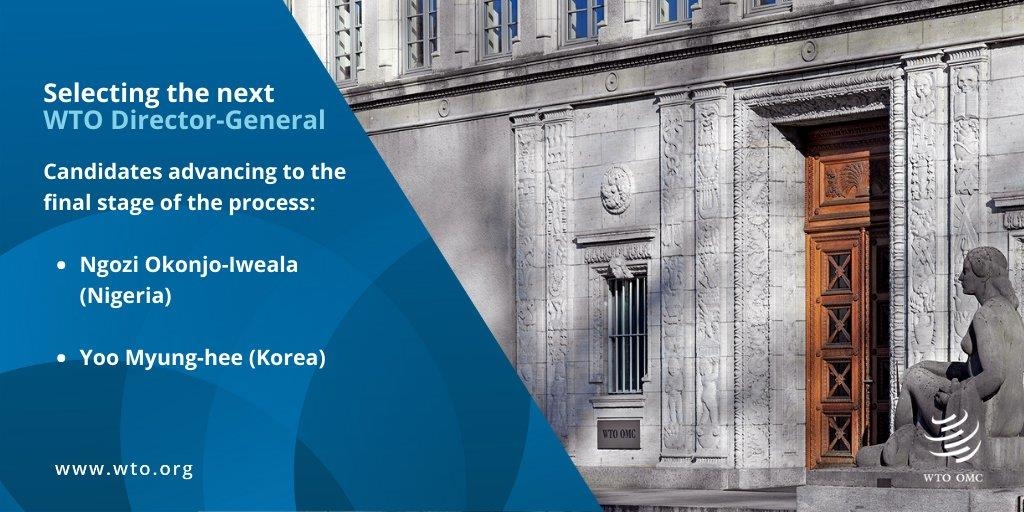 Yoo was appointed as South Korea's trade minister in February last year, becoming the country's first woman in the position in the 70-year history of the trade ministry. She is the third South Korean to run for the top post of the Geneva-based trade body. Two South Koreans made unsuccessful bids in 1994 and 2012.

Okonjo-Iweala has been cited as one of the most competitive candidates, based on her experience of working at the World Bank. She served two terms as Nigerian finance minister, and as a foreign minister.

Since July, she has visited various countries, including Switzerland, the United States, France and Sweden, to drum up support.

South Korea's bid for the top WTO position also comes amid its growing trade row with the neighboring Japan. Seoul and Tokyo have been at loggerheads since last year, after Japan abruptly imposed export restrictions of key industrial items against South Korea, citing security issues.

South Korea reopened its complaint at the WTO recently, as Japan has remained unresponsive to Seoul's repeated requests to lift the regulations.

In July, the WTO decided to launch a panel to look into the discord.

Japan's export curbs are viewed as retaliation against a South Korean court's ruling that ordered Japanese companies to provide compensation for their wartime slavery of Korean workers.

Apparently in response to the dispute, Japan reportedly has been against Yoo's bid to run for the top seat at the WTO.