SEOUL, Oct. 7 (Yonhap) -- Foreign Minister Kang Kyung-wha reaffirmed Wednesday that the government will continue its push for the declaration of a formal end to the 1950-53 Korean War despite the killing of a South Korean official.

She made the remark during a parliamentary audit as criticism has grown over the engagement policy for North Korea after the North's fatal shooting last month of a South Korean fisheries official at sea.

"Everyone is aghast that our citizen's life was lost so brutally and absurdly. But I do not think that we should change course of the big trend toward peace because of the one single incident," she told lawmakers when asked whether it's appropriate to discuss the war declaration with the United States following the killing.

"The end-of-war declaration that we've been pursuing should continue to be pursued as part of the peace process," she said.

Kang also offered sympathy to the bereaved family of the late official, saying that she was willing to meet the family members. 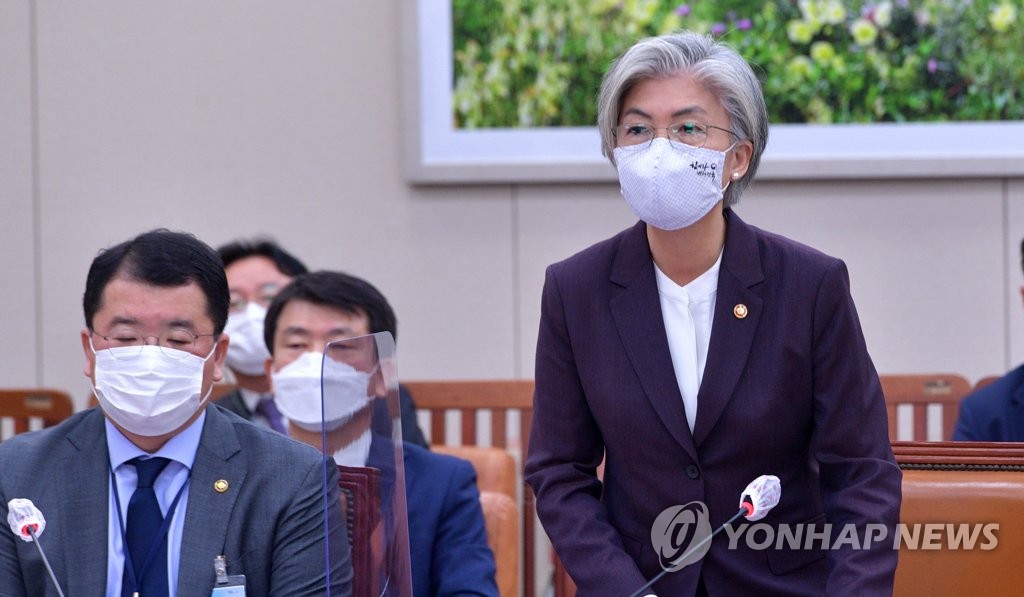 In a policy report for the parliamentary audit, the ministry stressed its steadfast focus on resuming dialogue with the North and cross-border cooperation.

It said it will also continue efforts to lay the groundwork for lasting peace on the peninsula, while noting it had "sternly" dealt with the September incident.

The fatal shooting renewed skepticism over engagement with a recalcitrant Pyongyang, though North Korean leader Kim Jong-un issued a rare apology over it in a message to the South's presidential office.

"While considering the status of inter-Korean relations, the ministry will continuously seek cooperation with the international community for the declaration of an end to the war on the Korean Peninsula, COVID-19-related public health and quarantine cooperation, and the realization of the proposal to turn the Demilitarized Zone into an international peace zone," it said.

The ministry also said it would continue strategic coordination with the United States in preparation for the possible resumption of long-stalled nuclear talks between Washington and Pyongyang.

"The ministry will continue to pursue comprehensive consultations (with the U.S.) that deal with denuclearization, relations between the two Koreas and between the North and the U.S., and the peace regime," it added.

During the parliamentary report, the ministry also said that as of Oct. 1, the government helped a total of 49,356 overseas citizens return home from 120 countries hit by the new coronavirus.