SEOUL, Oct. 7 (Yonhap) -- The rare sight of hundreds of police buses packing downtown Seoul last Saturday has ignited a debate over whether such a display of force was justified in light of the coronavirus pandemic to stop mass anti-government rallies from being held.

The debate comes ahead of another set of rallies planned for Friday, a national holiday celebrating the creation of the Korean alphabet, hangeul, which police have threatened to block again with buses.

Authorities are guarded against further outbreaks of the coronavirus after blaming mass rallies on Liberation Day on Aug. 15 for more than 600 new infections. The Seoul city government has since imposed a ban on rallies of 10 or more people until midnight on Sunday. 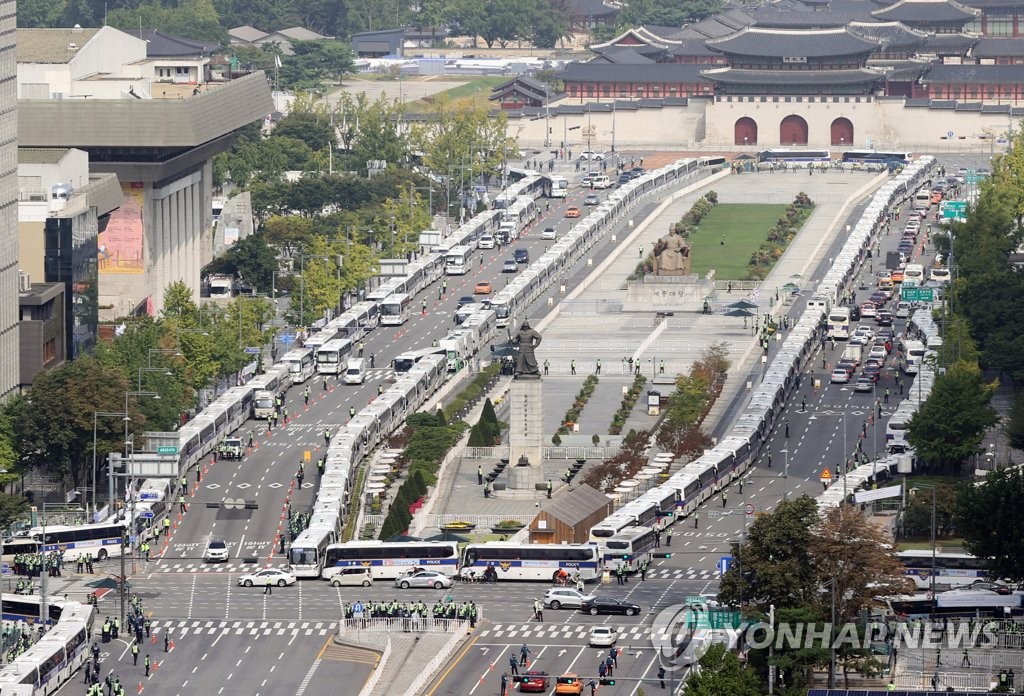 The arguments for and against the use of buses remain sharply divided along partisan lines, with proponents saying it was a necessary step to safeguard the public's health, and critics viewing it as an infringement of the constitutional right to freedom of assembly.

Nearly 92 percent of the ruling Democratic Party's (DP) supporters said they are in favor of the police blocking downtown rallies, including through the use of police buses, according to a survey released Wednesday by pollster Realmeter.

In contrast, nearly 80 percent of supporters of the main opposition People Power Party (PPP) said the measures were excessive, the survey showed.

The nation's top police officer, Kim Chang-yong, told reporters Monday that he is aware of the criticism but defended the action as an "inevitable choice" taken to minimize concerns about the spread of COVID-19. If necessary, he said, the police will use similar measures on Friday.

More than 10,000 police officers were deployed to the city center on Saturday, along with some 300 buses that were parked end to end around Gwanghwamun Square and on nearby streets to prevent protesters from gathering in a large group at major rally venues. Ninety check points were installed, fences lined the square and subway trains passed without stopping. 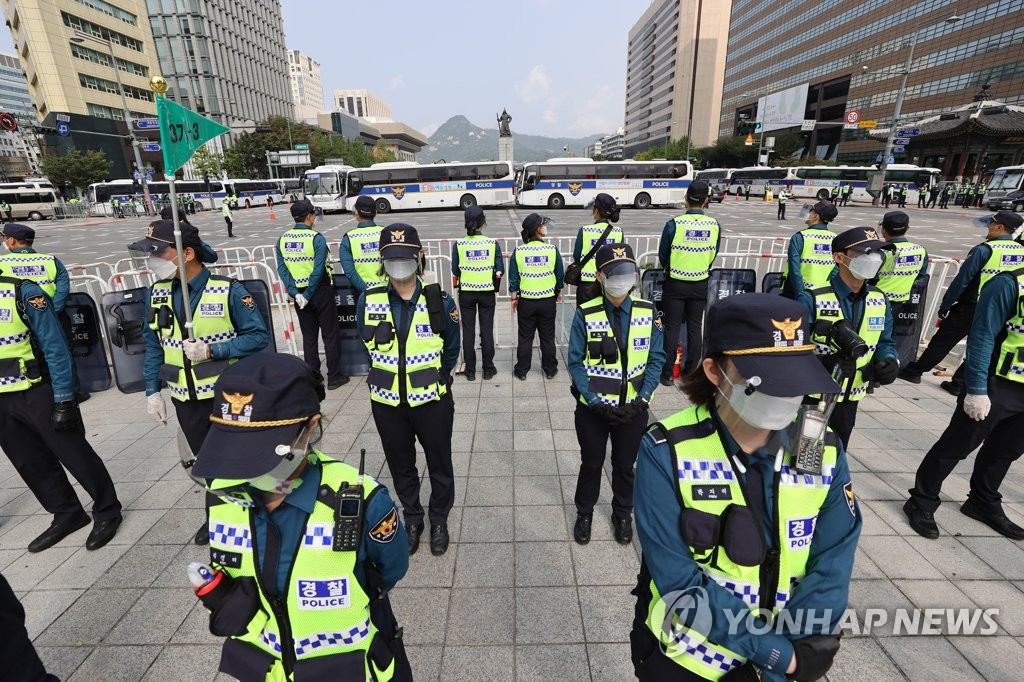 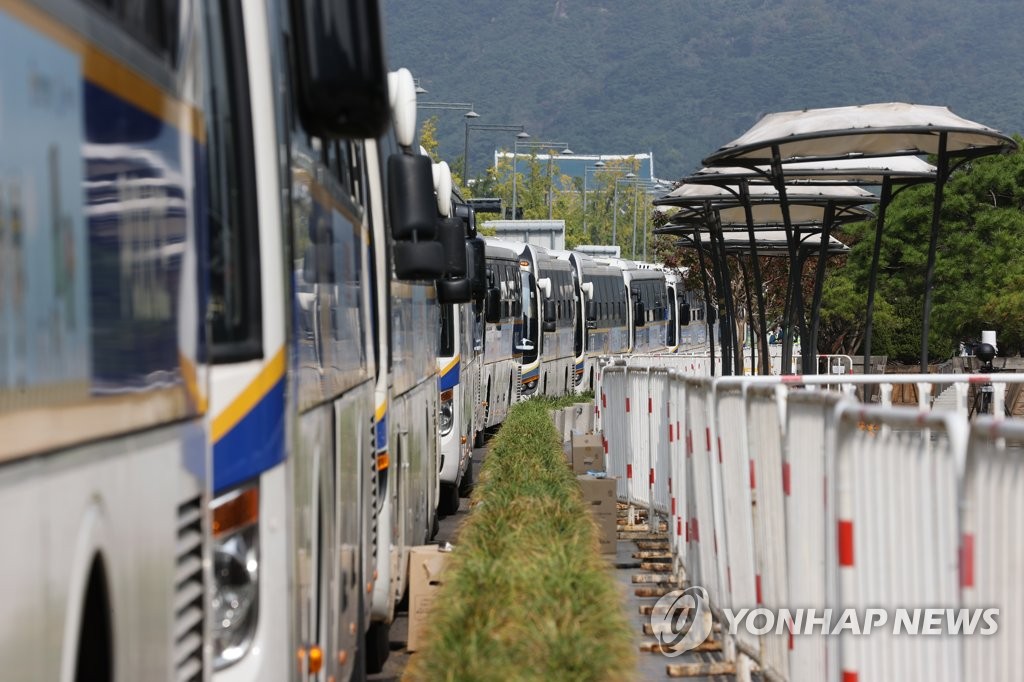 The police have justified their actions, citing a court ruling over mass rallies held in November 2015.

The Seoul High Court had ruled that the police had no option other than the use of police buses to avert crimes that could be committed by rally participants.

But critics of the government argue there is also a precedent against the use of police buses.

In 2011, the Constitutional Court under the conservative Lee Myung-bak government deemed it unconstitutional to surround the public square in front of Seoul City Hall with police buses in the wake of the death of former President Roh Moo-hyun in 2009, saying it was not a minimum necessary action and that other measures could be used to stop illegal rallies.

The PPP was quick to condemn the government.

"The government is building a new fortress on the streets of Gwanghwamun," Kim Chong-in, the party's interim head, said mockingly during a senior leaders' meeting on Monday. "I have no idea why (the government) is so afraid of the people that it needs to build a fortress smack in the middle of the city with the help of an enormous police presence and their buses."

Rep. Cho Su-jin of the PPP said it was President Moon Jae-in, who, as DP leader in 2015, tweeted that the country's democratic government was being "blocked by the unconstitutional wall of police cars" during large-scale rallies that year.

The PPP's secretary-general, Kim Seon-dong, also took a swipe at the ruling bloc for accusing the administration of then-President Lee Myung-bak of using police buses to build a so-called Myung-bak fortress during massive anti-government rallies in 2008 and now "building a 'Jae-in fortress' with its own hands."

The DP balked at the comparison, saying the 2008 rallies protested the alleged health risks of U.S. beef imports, while the recent rallies were being blocked in an attempt to "save lives."

"The Myung-bak fortress stopped the people, whereas that thing that I can't bear to utter stopped the virus," Rep. Park Beom-kye of the DP said on a radio show Monday, referring to the "Jae-in fortress." 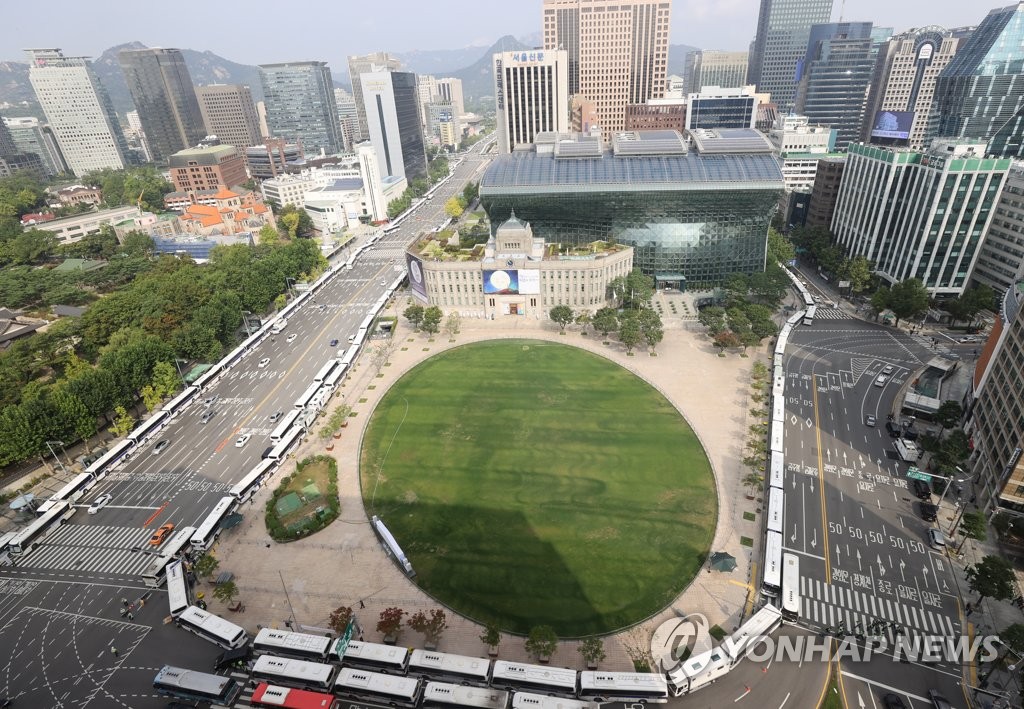