In a survey by pollster Hankook Research conducted from Saturday to Sunday on 1,000 people aged 18 or older, the favorabilities of the two Lees both stood at 24 percent.

Of the respondents, 38 percent said they had no preferred candidate.

Among the surveyed, support toward the DP chief was higher among supporters of the ruling party, self-identifying liberals and those in their 30s, 40s and over 70s.

Favorability of Gov. Lee was stronger among non-DP supporters, self-identifying moderate and conservative voters, and those in their 20s, 50s and 60s. 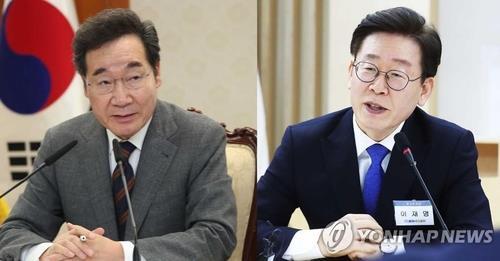 In a separate identical survey on opposition figures, Ahn Cheol-soo, head of the minor opposition People's Party, lead the race, with 9 percent, followed by Prosecutor General Yoon Seok-youl, with 8 percent.

Of the respondents, 55 percent said they had no preferred figure.

The poll was commissioned by the Kyunghyang Shinmun daily newspaper and has a margin of error of plus or minus 3.1 percentage points and a confidence level of 95 percent.