SEOUL, Oct. 9 (Yonhap) -- More than 630 teachers at elementary and secondary schools were disciplined for sexual offenses over the past three years, but nearly 30 percent of them got off lightly, a ruling party lawmaker said Friday, citing government data.

According to the education ministry data released by Rep. Park Chan-dae of the Democratic Party, 633 elementary and secondary school teachers were referred to the disciplinary committees from 2017 to June this year for committing sexual crimes, including sexual harassment, assaults and trafficking. 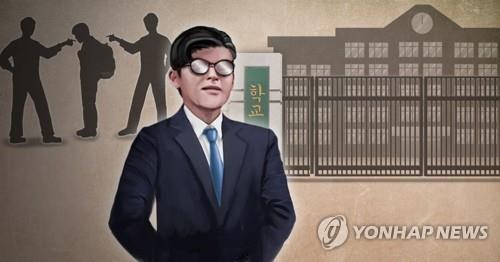 But as many as 173, or 27.3 percent, of the 633 perpetrators got off with light punishments, such as a salary reduction, reprimand and warning, Park said.

In particular, half of the sexual trafficking offenders were punished lightly, he noted.

By the type of schools, 127 sexual offenders were from elementary schools, 172 from middle schools and 324 from high schools.

Teachers of national and public schools accounted for 342 of the offenders, with the remaining 291 belonging to private schools, he said.

By region, Seoul accounted for 130 of the disciplined teachers, followed by Gyeonggi Province with 128 and Gwangju with 45.

"The majority of sexual offense victims in schools are students. But as many as 27 percent of the teachers accused of sexual crimes have been lightly disciplined, indicating widespread insensitivity to sex crimes at schools," Park said.

"All sexual offenses against students should be punished under the principle of zero tolerance," he stressed.

Over 630 teachers disciplined for sexual offenses since 2017

Over 630 teachers disciplined for sexual offenses since 2017