After a whirlwind but outstanding rookie season with the St. Louis Cardinals, South Korean pitcher Kim Kwang-hyun returned home Wednesday, four days after his club was eliminated from the first round of the postseason.

Kim will be reunited with his family after serving his mandatory 14-day quarantine. Kim's wife and two children greeted him at Incheon International Airport, just west of Seoul, though they couldn't get close to one another because of quarantine regulations.

Following 13 largely successful years with the SK Wyverns in the Korea Baseball Organization (KBO), Kim signed a two-year, US$8 million contract with the Cardinals last December. During the regular season, Kim was a perfect 3-0 with a 1.62 ERA in eight appearances, seven of them starts. He even recorded a save on Opening Day on July 24 against the Pittsburgh Pirates. 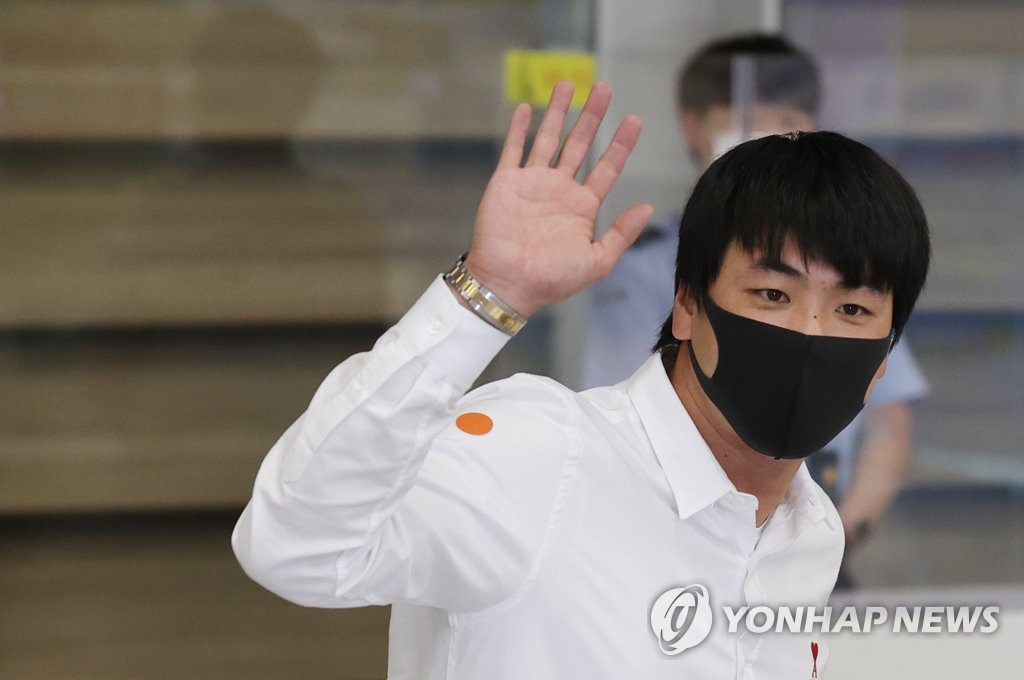 Kim was the surprise Game 1 starter against the San Diego Padres in the best-of-three National League Wild Card Series, getting the nod ahead of more established big leaguers, Adam Wainwright and Jack Flaherty. Kim gave up three runs in 3 2/3 innings in the Cardinals' 7-4 victory. The Cardinals, though, dropped the next two games to be sent home from the postseason, and Kim never got another chance to redeem himself after the mediocre Game 1 performance.

Despite Kim's strong pedigree as an MVP-winning starter, his role entering spring training was up in the air. Kim said all the right things -- that he would do whatever the club asked him to do -- and the Cardinals, falling short of guaranteeing Kim a spot in their rotation, promised him an opportunity to earn his spot.

Kim did his part by pitching eight scoreless innings across four spring training games, including two starts, while recording 11 strikeouts against just one walk. 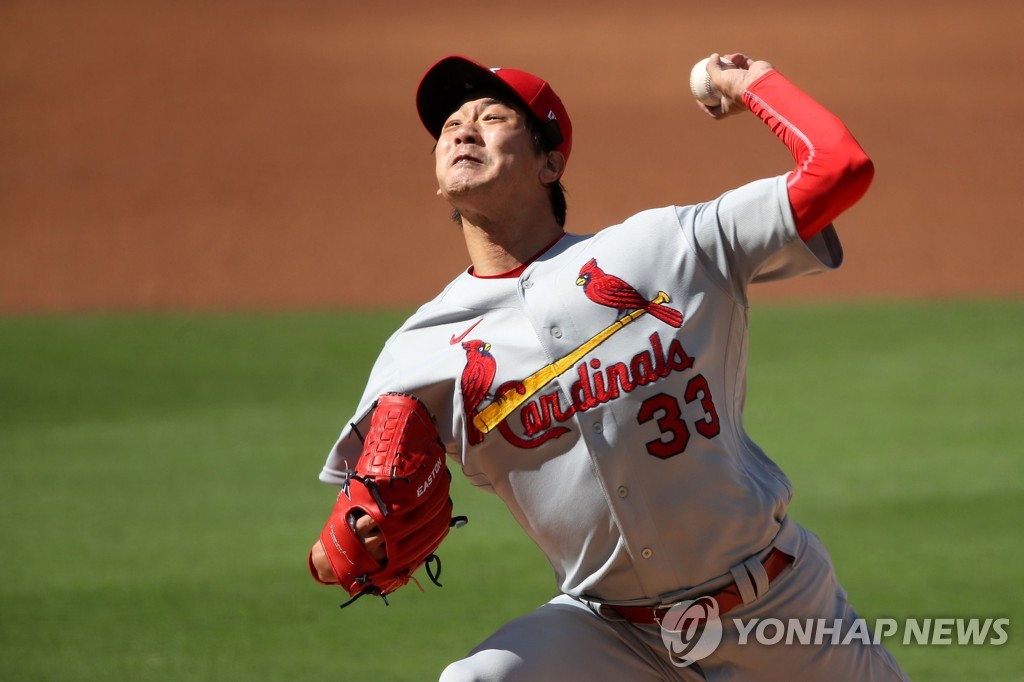 Just as Kim appeared poised to make the rotation, the coronavirus hit Major League Baseball (MLB), and spring training came to an abrupt halt. The regular season only started in late July.

When clubs reconvened for a brief summer camp, Kim emerged as a bullpen option, and the Cardinals named him their closer at the start of the regular season.

He picked up a nervy save against the Pirates, giving up two runs -- one unearned -- in the ninth inning for a 5-4 victory.

The Cardinals ran into another obstacle, however, as they were forced to go on a two-week hiatus following an outbreak inside their clubhouse. And when they returned to action, Kim was thrust into the rotation because of injuries to multiple starters.

Kim pounced on that opportunity. Following an abbreviated start against the Chicago Cubs on Aug. 17, when he pitched just 3 2/3 innings and gave up a run, Kim strung together 24 consecutive innings without allowing an earned run over his next four starts. He lowered his ERA to 0.63. 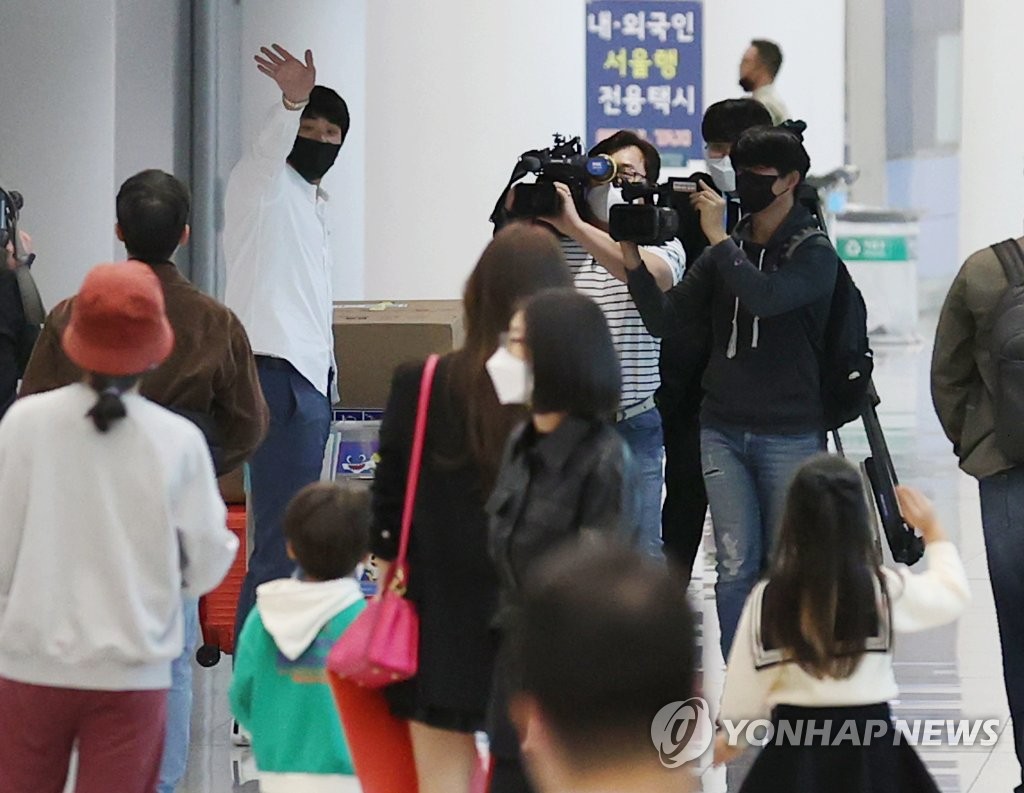 The 32-year-old then had to overcome his own health issues. While in Chicago for a road trip in early September, Kim suffered a kidney ailment and spent a night at a local hospital. He was on the injured list for 12 days.

And as had been the theme all season, Kim bounced back nicely. On Sept. 14, in his first start back from the health scare, Kim tossed seven shutout innings against the Milwaukee Brewers and struck out a season-high six batters in his best start of 2020.

Though Kim's miniscule ERA took a beating over his final two starts, when he served up five earned runs over 10 1/3 innings, it didn't put a damper on his fine rookie campaign.

Though Kim only pitched 39 innings, not enough to qualify for the ERA title, he will likely receive some down-ballot Rookie of the Year votes. 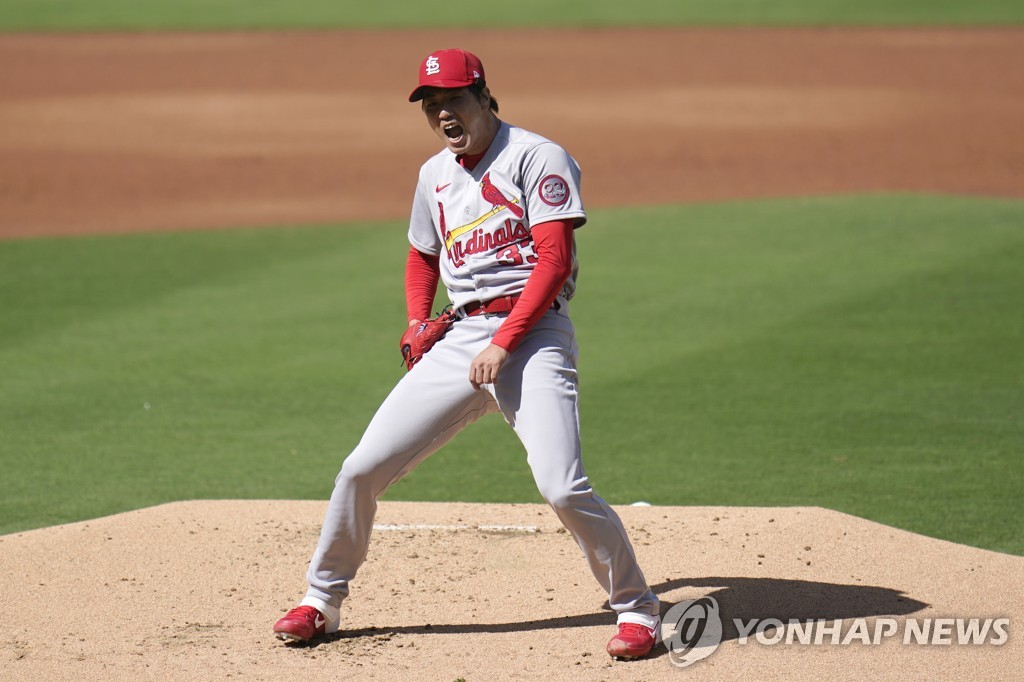