The annual defense ministers' talks between the two countries, known as the Security Consultative Meeting (SCM), are scheduled to take place in Washington on Oct. 14, the minister said during the parliamentary audit of the ministry.

The planned visit will be his first overseas trip since taking office last month. It will also be the first time for a South Korean defense minister to visit a foreign country since February due to the new coronavirus.

Key agenda items include the assessment of security circumstances on the Korean Peninsula, the U.S. Forces Korea-related issues and the envisioned transfer of wartime operational control (OPCON) of South Korean troops from Washington to Seoul, the minister stated.

The defense ministry has said that discussions are under way with the U.S. on when and how to hold the regular meeting amid the COVID-19 pandemic.

The last bilateral meeting between the defense chiefs of the two countries was held by videoconference in July. 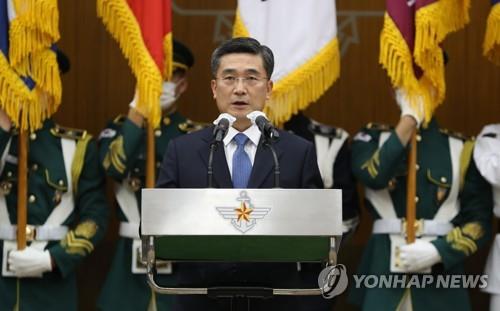