SEOUL, Oct. 8 (Yonhap) -- President Moon Jae-in proposed Thursday that South Korea and the United States join forces to declare a formal end to the 1950-53 Korean War, saying it's a way to open the door for peace on the peninsula and make the alliance even greater.

"I hope that our two countries work toward the end-of-war declaration and draw active participation from the international community in this regard," he said in a video speech for the Annual Gala Dinner of the Korea Society. Based in New York, the private and nonprofit organization has long campaigned to promote ties between the allies.

"When we not only deter war but also actively create and institutionalize peace, our alliance will be even greater," Moon said.

He stressed that the end-of-war declaration will "indeed pave the way for peace on the Korean Peninsula."

And, he added, establishing permanent peace in Korea is "the only genuine way to reciprocate the sacrifices and dedications of the Korean War veterans." 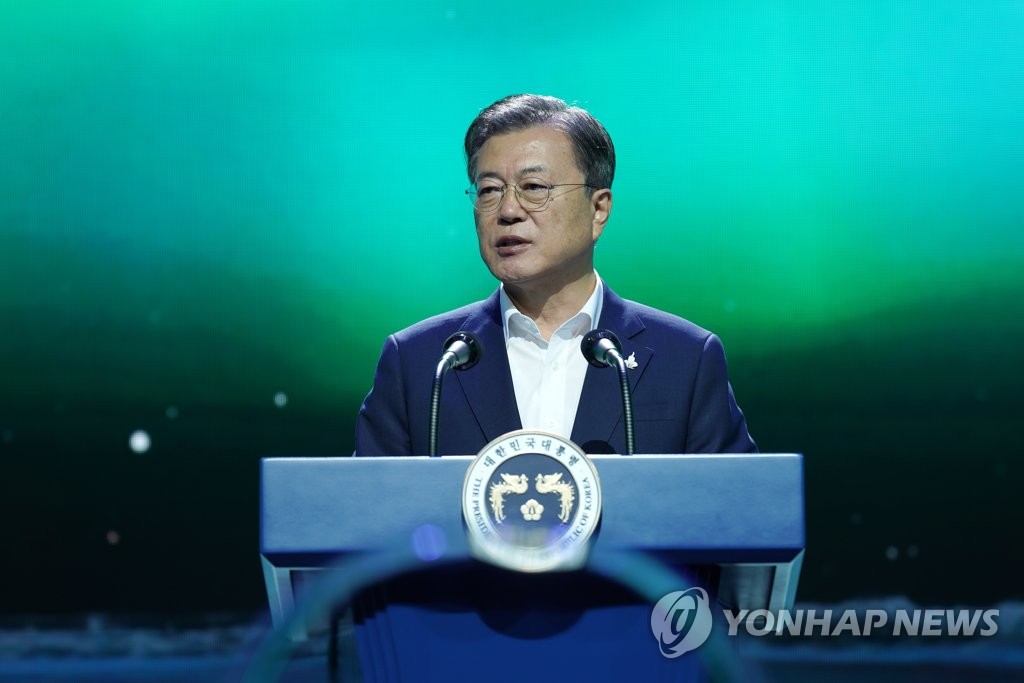 Addressing the virtual U.N. General Assembly session last month, the president restated his suggestion that the two Koreas, the U.S. and, probably, China declare that the war is over. The two Koreas remain technically at war as the conflict finished in an armistice, not a peace treaty.

Moon used the Korea Society speech to emphasize the significance of the end-of-war declaration amid a controversy over the recent killing of a South Korean government worker by the North's troops around the Yellow Sea border.

While the North's leader Kim Jong-un issued a rare apology to Moon and South Koreans over the incident, Pyongyang has been unresponsive to Seoul's offer of a joint inquiry on what happened.

Those critical of the Moon administration have fiercely condemned its handling of the case.

Moon cited "substantive process" in efforts to bring lasting peace to Korea thanks to a series of inter-Korean and U.S.-North Korea summit talks.

"However, the talks have now stalled, and we are catching our breath," he said. "We can neither allow any backtracking on hard-earned progress nor change our destination."

He added that South Korea and the U.S. will continue the efforts to build trust with North Korea "by keeping our ears, mind and heart open toward it."

On the Seoul-Washington alliance, Moon said it's in a "new evolutionary phase" with the two countries dealing with not only regional but also global issues together, including the COVID-19 pandemic.

"It is high time for the ROK-U.S. alliance to demonstrate its power once again," he said, using the acronym for the Republic of Korea, South Korea's official name.

He referred to President Donald Trump's invitation of him to attend the G-7 summit.

"I take it as America's call on Korea to assume responsibility and a role commensurate with its international stature based on deep mutual trust between our two countries," Moon said.

South Korea will live up to these expectations and also actively join the concerted global efforts to respond to the coronavirus crisis, he added.