SEOUL, Oct. 8 (Yonhap) -- Samsung Electronics Co. on Thursday expected its third-quarter profit to be the largest in two years, as its chip business got a boost from U.S. sanctions on Huawei Technologies Co. and its mobile sales bounced back on pent-up demand amid the pandemic.

In its earnings guidance, the South Korean tech giant estimated its operating profit at 12.3 trillion won (US$10.6 billion) for the July-September period, up 58.1 percent from a year ago.

If its sales estimate is confirmed, Samsung will have its largest-ever quarterly sales, beating the previous record of 65.98 trillion won in the fourth quarter of 2017.

Analysts have been raising earnings estimates for Samsung in recent weeks, betting that its chip business is not likely to have suffered a big earnings drop despite a decline in memory prices, as rush orders from Huawei, the world's top telecom equipment maker and No. 2 smartphone producer, may have helped Samsung avoid the worst-case scenario.

Huawei, one of Samsung's largest customers, has been aggressively procuring semiconductors ahead of the U.S. export restrictions that have been in place since Sept. 15.

"Due to Huawei's rush orders after mid-August, it appears that Samsung has posted bit growth of 4 percent for DRAM and 13 percent for NAND flash, respectively," Song Myung-sub, an analyst at Hi Investment & Securities, said.

According to DRAMeXchange, a market tracker under TrendForce, the average contract price for 8-gigabit DDR4 DRAM, a benchmark price for the category, remained unchanged at $3.13 last month. Its price has been staying put since suffering a 5.44 percent drop in July.

The average contract price for DDR4 32GB RDIMM, a server DRAM chip mainly purchased by cloud firms, dropped for three consecutive months. It reached $122 at the end of September, down 4.69 percent from a month earlier, DRAMeXchange data showed.

While its mainstay chip business is staying afloat, analysts believe Samsung's mobile business has anchored the robust third-quarter earnings with increased smartphone sales on the back of pent-up demand.

Many analysts here expected Samsung's mobile business to log an operating income of more than 4 trillion won in the third quarter, a big jump from its second-quarter operating profit of 1.95 trillion won.

With major markets normalizing their retail channels, Samsung's Galaxy smartphone sales were estimated to be around 80 million units in the third quarter, about a 50 percent increase from the previous quarter.

"The average selling price of Samsung's smartphones in the third quarter is estimated to have increased 10 percent from a quarter ago," Park Sung-soon, an analyst at Cape Investment & Securities, said. "Expanded online sales and decreased marketing costs would have also improved its profitability." 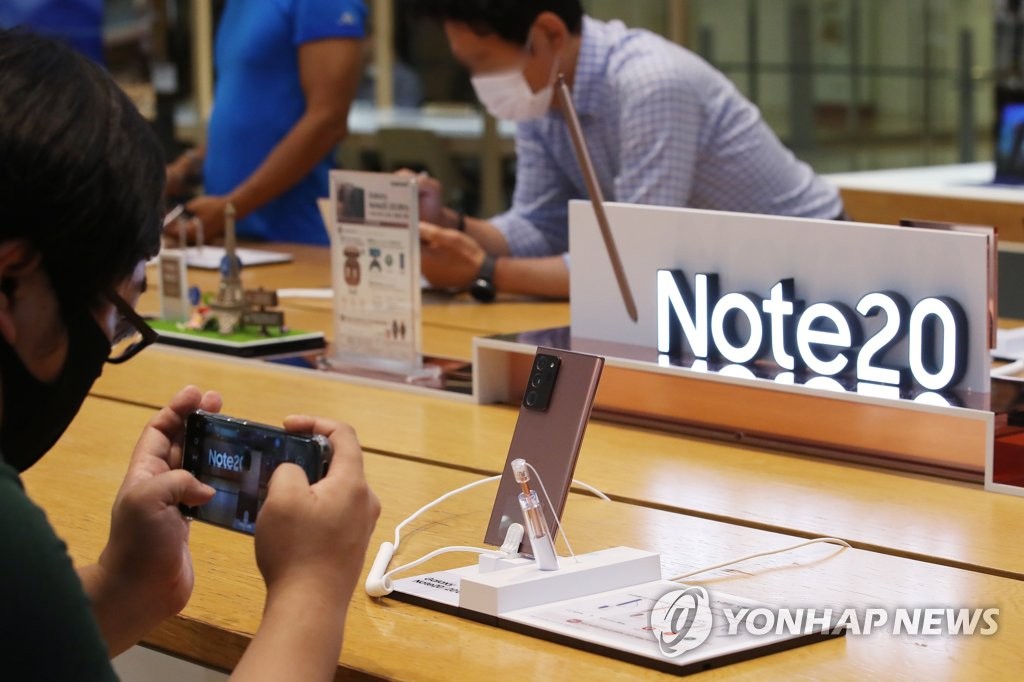 Samsung's home appliance business has also been tipped to get a big boost from pent-up demand amid the stay-at-home economy driven by the pandemic.

Some analysts here even predicted the company's consumer electronics unit to post over 1 trillion won in operating profit in the third quarter, its best quarterly performance since the second quarter of 2016.

"As retailers made aggressive procurement for TVs ahead of the year-end shopping season, it is expected Samsung's visual display unit would make an improvement in its earnings," Kim Yang-jae, an analyst at KTB Investment & Securities, said.

Shares in Samsung dropped 0.33 percent to 59,700 won on the Seoul bourse, underperforming the broader KOSPI's 0.21 percent increase despite its upbeat earnings guidance.