The call marked the first talks between the two since Suh took office as defense minister last month.

"The two ministers reaffirmed the importance of strengthening the ironclad South Korea-U.S. alliance and closely cooperating on defense issues," the ministry said in a release.

Esper congratulated Suh on his inauguration and expressed expectations for their Security Consultative Meeting (SCM) slated to take place in Washington on Wednesday.

The planned visit will be Suh's first overseas trip as South Korea's defense chief. It will also be the first time for a South Korean defense minister to visit a foreign country since February, due to the new coronavirus.

In Washington, the Pentagon released a similar readout, saying the two sides "pledged to continue cooperation and to deepen and develop the ROK-U.S. Alliance in a future-oriented and mutually reinforcing manner." 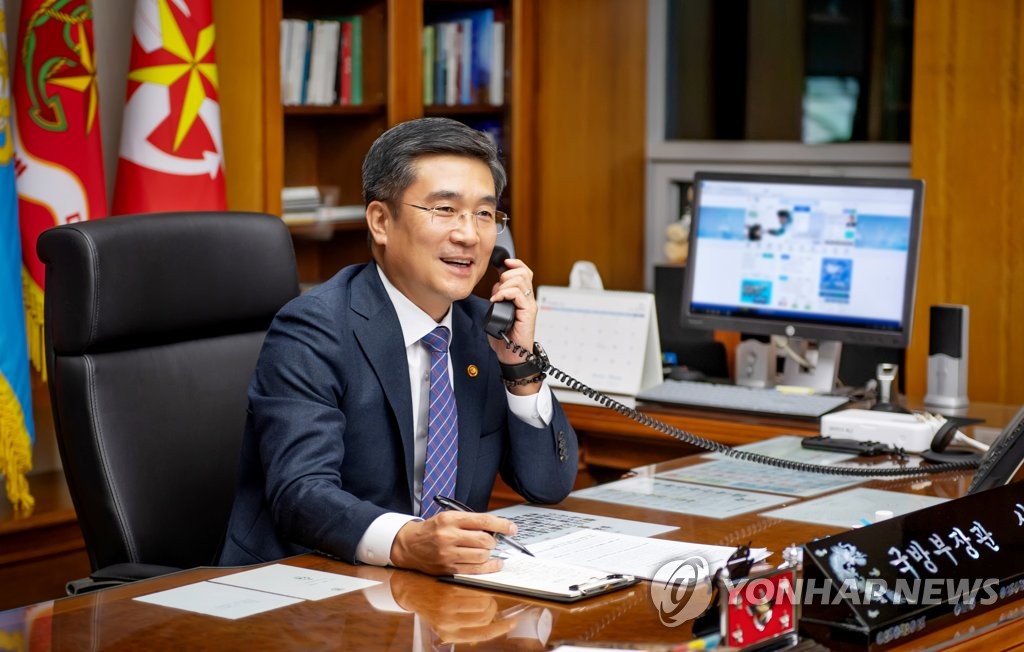 Suh's three-day trip to the U.S. will begin Tuesday.

During the upcoming meeting, the two defense chiefs will discuss various pending security issues, including the transfer of wartime operational control (OPCON) of South Korean forces from Washington to Seoul, the ministry said.

"Working-level consultations are currently under way on the issue, and it is also expected to be a core focus of discussions at the meeting," a ministry official told reporters.

The South Korean military has said it will accelerate the push to retake the OPCON based on the strong alliance with the U.S.

North Korea is also likely to be a key agenda item as the meeting will take place just days after a military parade that the North is expected to hold Saturday to mark the founding anniversary of the ruling Workers' Party.

The North could unveil new strategic weapons during the event, Suh earlier said, in what could be seen as messages to the U.S., or South Korea, amid stalled denuclearization talks.

The minister's trip also comes as top American military leaders are in quarantine, with U.S. Joint Chiefs of Staff (JCS) Chairman Gen. Mark Milley reportedly among them, after coming into contact with U.S. Coast Guard's Vice Commandant Adm. Charles Ray, who tested positive for the new coronavirus earlier this week.

South Korea has minimized the size of its delegation in consideration of the COVID-19 situation and was told by the U.S. that none of its members who are participating in the ministerial meeting have been affected by the recent virus outbreak.

Suh and Esper will hold a joint press conference after their meeting.

During his U.S. stay, Suh will also visit a memorial park for 1950-53 Korean War veterans. This year marks the 70th anniversary of the outbreak of the conflict.

On Tuesday, JCS Chairman Gen. Won In-choul will hold the annual Military Committee Meeting with Milley in a video call ahead of the two ministers' talks.