Hyundai Motor is at an initial state of selling its hydrogen fuel-cell commercial vehicles in global markets.

In July, the company shipped 10 XCIENT Fuel Cell hydrogen trucks to Switzerland in the country's first exports of hydrogen commercial vehicles. Hyundai plans to deliver 40 additional XCIENTs to the European country by December as part of its long-term contract to export a total of 1,600 XCIENTs to the country by 2025. 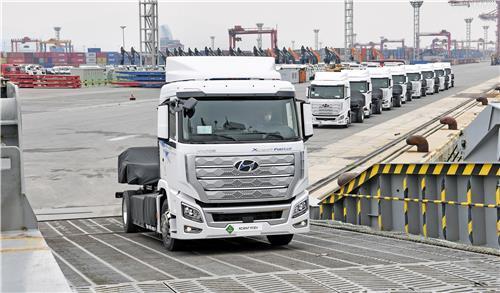 The maker of the Sonata sedan and the Palisade sport-utility vehicle is targeting to export an accumulated 25,000 hydrogen commercial cars to Europe, 12,000 to the United States and 27,000 to China by 2030, the company said in a statement.

It is planning to develop a hydrogen truck which can travel more than 1,000 kilometers on a single charge, it said. The XCIENT can travel up to 400 km per charge.